The importance of a full and detailed history has been known for centuries, as can be seen in these quotes by notable Americans:

“The more you know about the past, the better prepared you are for the future.” – Theodore Roosevelt

“History cannot give us a program for the future, but it can give us a fuller understanding of ourselves and of our common humanity, so that we can better face the future.” – Robert Penn Warren

“We are not makers of history. We are made by history.” – Dr. Martin Luther King Jr. 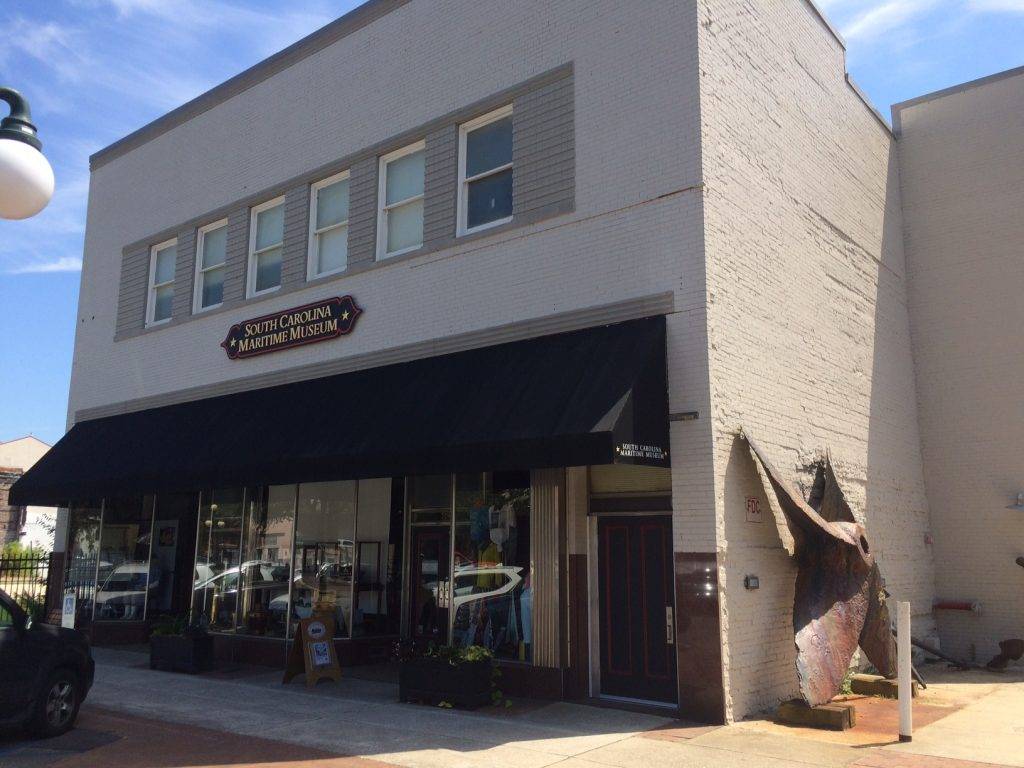 “This is a big undertaking that we have developed from the ground up,” said Susan Davis, a member of the Harbor Historical Association, a nonprofit organization that raises funds for the South Carolina Maritime Museum. “There will be three phases. This is just the kick start.”

The first phase of exhibits, which focuses on the transatlantic slave trade, was made possible through a grant from the Gaylord and Dorothy Donnelley Foundation with its first-ever “Broadening Narratives” initiative. That initiative funds specific collections projects that bring forward underrepresented stories.

Many visitors to South Carolina’s Hammock Coast® seek out the county’s rich and important Black history. Gullah Geechee history is highlighted at areas around Georgetown County, including Brookgreen Gardens, Hopsewee Plantation and other key sites, such as the Gullah Museum in Georgetown. Discover five paths to Gullah Geechee culture by clicking here.

The South Carolina Maritime Museum hosted an invitation-only preview of the first exhibit on Dec. 2, 2021. Located on the second floor of the museum, the in-depth exhibit, now open to the public, includes dozens of panels featuring photographs, data, maps, graphs and even newspaper advertisements for slave sales — all taken from a variety of sources that tell a disturbing, yet important, story of the transatlantic slave trade as it relates to the South Carolina coast.

“This is history that should be told,” said Justin McIntyre, curator and historian at the museum. “It is dark history, it is tragic, but it is history nonetheless and it is our history.” 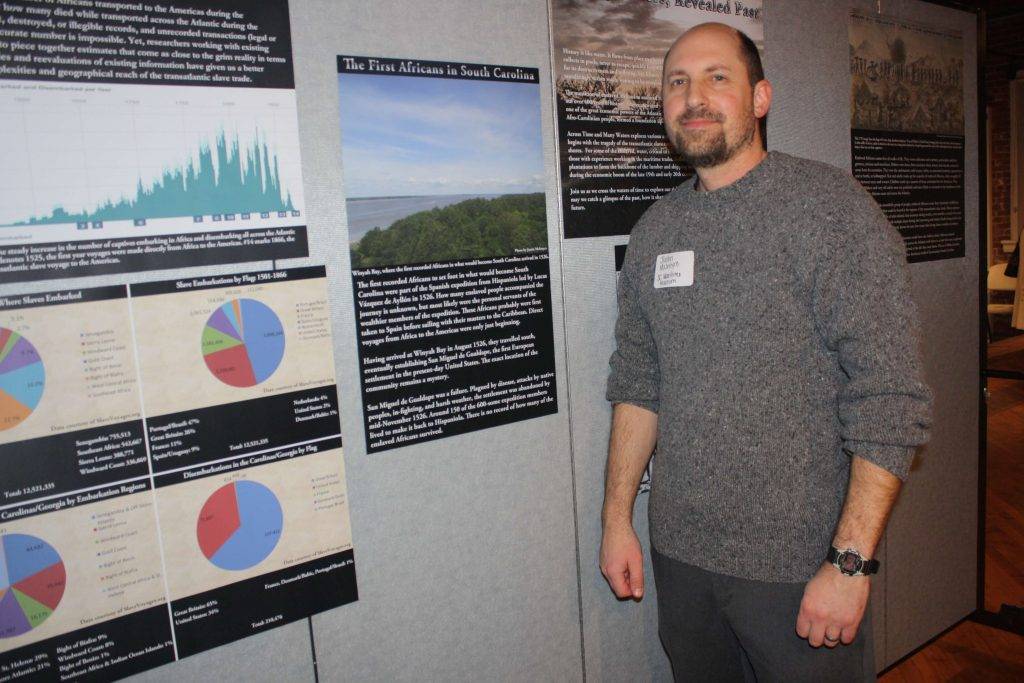 Justin McIntyre, curator of the South Carolina Maritime Museum, stands by the first installment of an exhibit he researched and created titled, “Across Time and Many Waters: South Carolina’s Afro-Carolinian Maritime World.” (Photo by Clayton Stairs/Georgetown County Chamber of Commerce)

“Across Time and Many Waters: South Carolina’s Afro-Carolinian Maritime World.”

The first phase shares rarely known facts about the transatlantic slave trade, including that the Spanish brought enslaved Africans to the new world through Winyah Bay, near what is now Georgetown, in 1526. The historical record usually starts with Africans being brought to Charles Town Landing in 1619, but those enslaved Africans would have come with the colonists from the Caribbean islands and direct sailings started in the early 1700s. It also shows through newspaper ads that the term “Gullah” was used to describe enslaved people brought over from West Africa as early as the 1700s.

McIntyre has spent hundreds of hours collecting, researching, and compiling information for the first installment of the exhibit. Exhibits will continue over the next year, highlighting maritime jobs held by enslaved Africans and later by liberated African Americans. The series will include oral histories from local residents sharing their knowledge about the topics of the exhibits.

“I am excited that we are able to tell this story, a story that needs to be told, and the museum is proud to host it and bring in the community to experience it,” McIntyre said. “When we work with the community to get those stories and get the oral histories going, it will really flesh things out.”

He credited several sources for his research.

“The imagery came from a lot of sources, everything from Wikimedia Commons all the way to the Royal Museums in Greenwich, England,” McIntyre said. “I researched a whole range of source to get imagery that would fit well with the story we wanted to tell.” 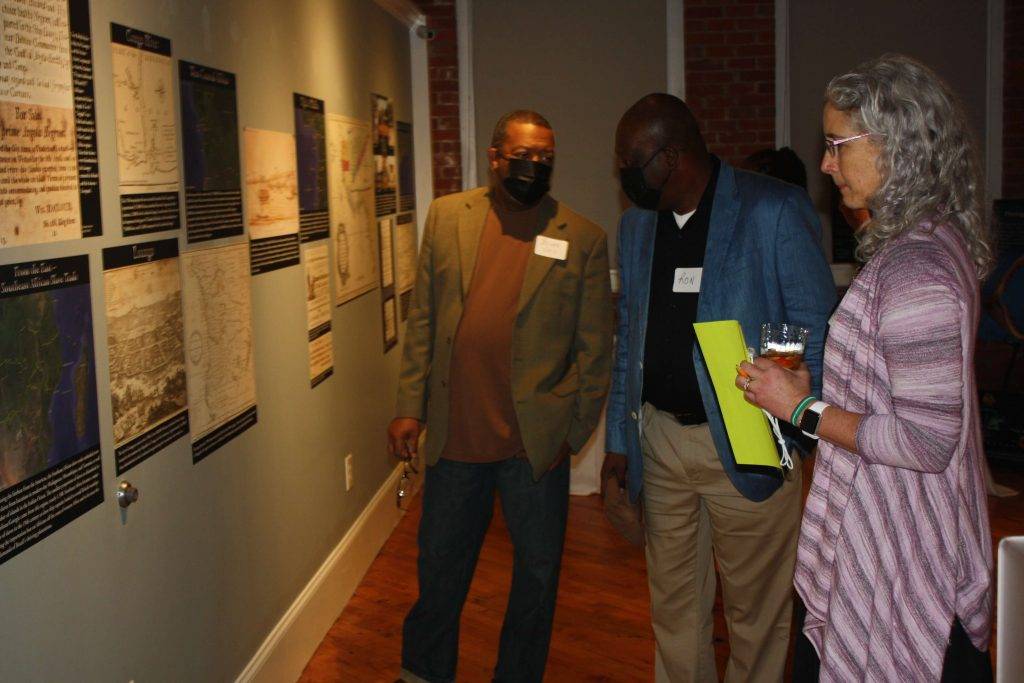 He said another valuable source was slavevoyages.org.

“Those folks have put together years of work documenting these slave voyages to the Americas and that is where the hard data came from, graphics, numbers, etc.,” McIntyre said. “It would take years to accumulate that and that is a great resource for anybody to do research.”

Newspapers.com and the Atlas of the Transatlantic Slave Trade were also important resources.

“Anyone can access this material, it just takes time to go through it,” McIntyre said. “You can go paper by paper, year by year. That’s what it takes to get those nuggets of information that are really going to stand out for people.”

The Donnelley Foundation supports land conservation, artistic vitality, and regional collections. The grants total $579,000 and have gone to 10 organizations, each getting $25,000-$100,000 to fund new projects. Georgetown’s Harbor Historical Association was one of the recipients for the first round of grants. Other South Carolina recipients of the first round are the Avery Research Center for African American History and Culture at the College of Charleston; Coastal Carolina University; Drayton Hall Preservation Trust; and Penn Center.

“While the purpose of collections is to ensure that stories are preserved, many narratives are often overlooked because of decisions based on race, gender, sexual identity, educational background, economic or social status, or because they are perceived to be outside the conventional thinking of the day,” said David Farren, executive director of the Donnelley Foundation. “We want to thank these organizations for being part of this new way forward in collections thinking that shifts focus from the processing of material objects to the telling of broader and more inclusive narratives.”

This is one section of the current exhibit sharing the history of the transatlantic slave trade specifically to South Carolina. (Photo by Clayton Stairs/Georgetown County Chamber of Commerce)

The $25,000 grant awarded to the Harbor Historical Association and the South Carolina Maritime Museum is for a “collection of oral histories and displays illuminating the role of African-Americans in South Carolina maritime history, including the transatlantic slave trade to South Carolina; using water as a means to escape enslavement; and the post-Civil War transition from enslaved labor to work in the lumber and shipping industries.”

Davis said that in prior years, the South Carolina Maritime Museum exhibits haven’t fit the Donnelley’s criteria, but this year, the “Broadening Narratives” approach was in line with the museum’s focus.

“What we felt we could do in that regard is talk about the African-American experience from Africa to South Carolina and South Carolina specifically,” Davis said. “Then we will focus on the transition from the plantations to the economy and the maritime contributions of African-Americans to Georgetown and the surrounding areas.”

She added that the museum has plans for sharing the exhibits by inviting schools and other groups to experience them. 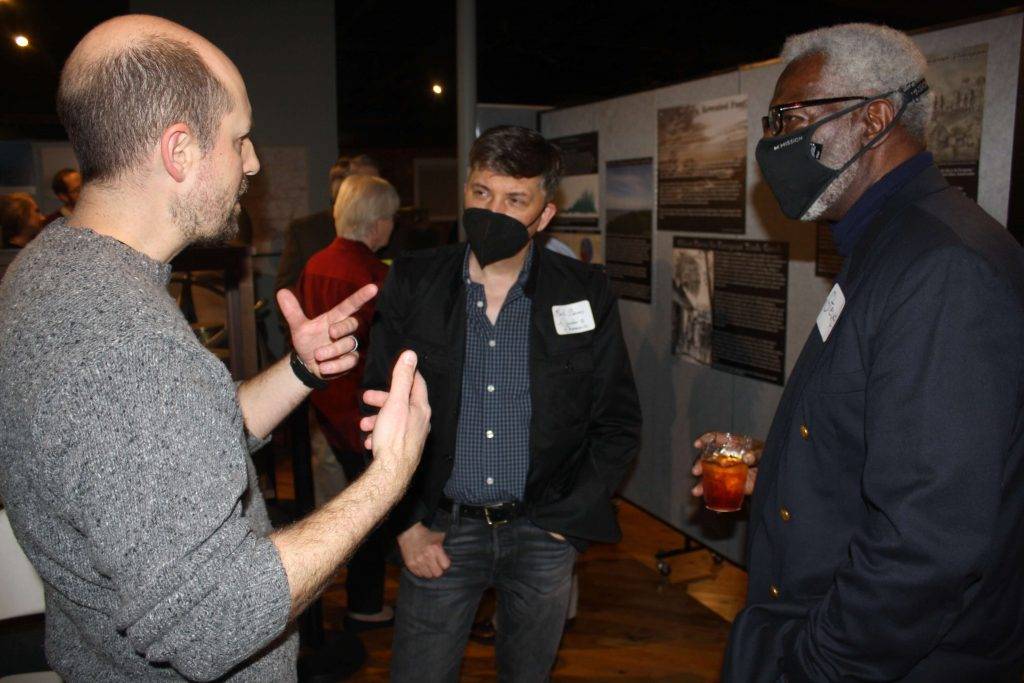 Justin McIntyre, curator of the South Carolina Maritime Museum, explains to Mark Stevens and Steve Williams how the Spanish brought slaves to the new world in 1527 through Winyah Bay to where Georgetown is today. (Photo by Clayton Stairs/Georgetown County Chamber of Commerce)

Attendees of the preview event said they were impressed with the first installment of the exhibit series. Steve Williams, a local historian and author, said he is happy that the museum is creating the exhibits about broadening narratives.

“What I like about this particular exhibit is it covers not just Africans in the United States, but it goes all the way to Africa,” Williams said. “Africans have a lot to do with maritime history in this area.”

Williams will be one of the first people to give an oral history for the exhibits. His grandfather was a riverboat pilot in Georgetown.

“He steered the big ships through these narrow waterways and tributaries,” Williams said. “Then, a lot of the equipment that we see in churches and other buildings had to come through the waterways, and from there it was brought on land.”

Bob Willey, a volunteer at the museum who may also provide an oral history, said he’s excited about the series of exhibits and seeing the whole process play out. He said McIntyre has been working hard to research every aspect of the transatlantic slave trade.

“What he’s been doing as far as discovering particularly South Carolina’s connections to slavery and slave importation, and what he has discovered, as far as the history and documentation, has been wonderful and very thorough,” Willey said.

Ron Daise, vice president of creative education at Brookgreen Gardens and renowned Gullah storyteller, performer, and author, said he was most interested in the parts of the exhibit about West Africa.

“The significance of our West African heritage is one of the things I find important from this exhibit,” he said. “There is information about Seirra Leone, but there were a number of African countries along the coast where Africans were herded together and brought over to this country.” 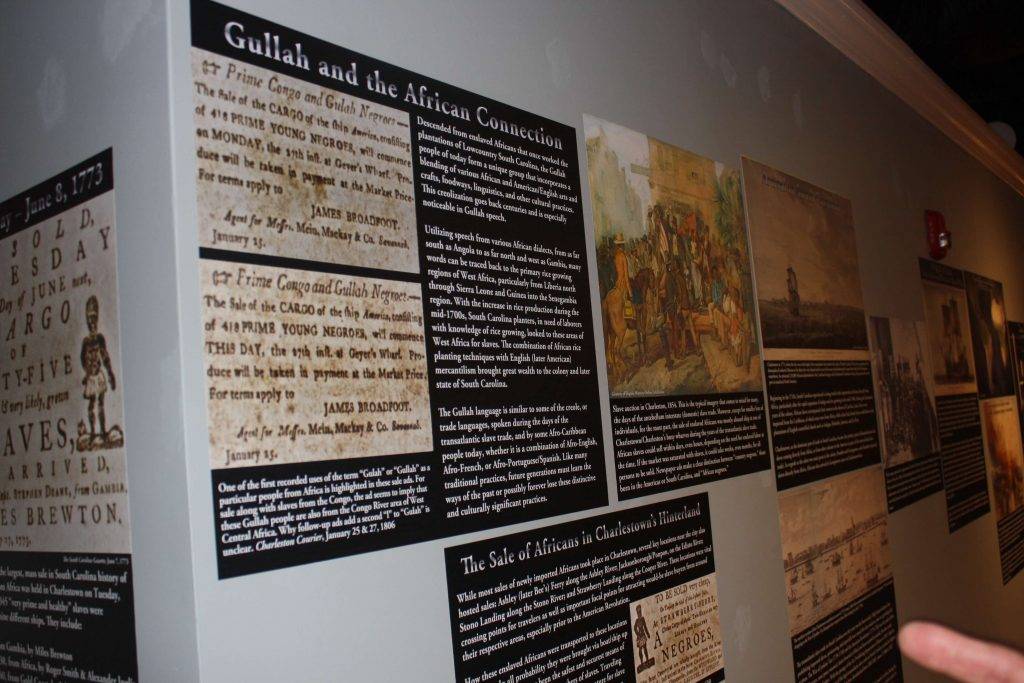 The exhibit shares the fact that the term “Gullah” was used as early as the 1700s., as well as other rarely-known facts about the transatlantic slave trade. (Photo by Clayton Stairs/Georgetown County Chamber of Commerce)

He added that it is very important that the museum wishes to add to the knowledge and research of the exhibits by collecting oral histories.

“As I found in my 18 years now in Georgetown County, working at Brookgreen Gardens, there are still many Georgetonians who are reluctant to identify themselves as Gullah Geechee,” Daise said. “Particularly, the emphasis of the second part of this exhibit will help raise awareness and let people know the significance of their heritage.”

“This exhibit helps us understand how Colonial Carolina’s entire economy was based on enslaved labor and how important the port cities were to the means to that end,” Brockington said. “I look forward to the oral histories of 20th-century stevedores and dockworkers. There is so much the average resident of Georgetown County does not know about this topic.”

The South Carolina Maritime Museum is located at 729 Front St. in Georgetown. Admission is free. For more information about the museum, visit the museum’s website here. 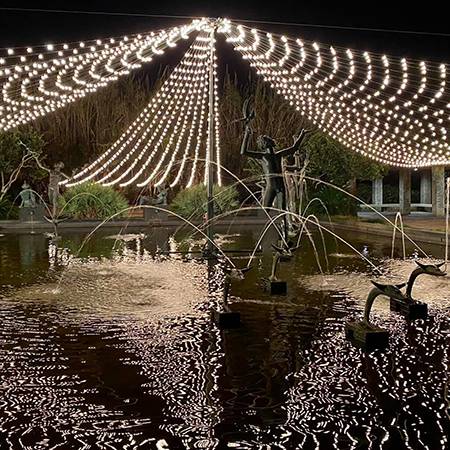 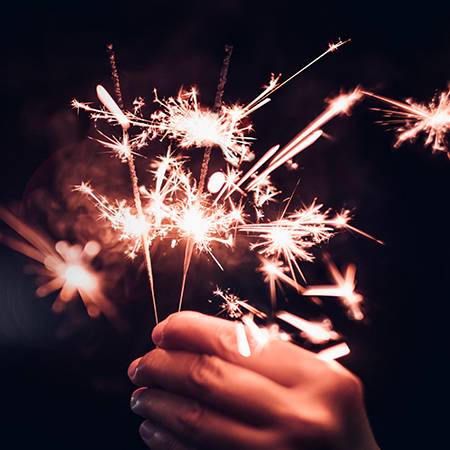