Ron and Natalie Daise of Georgetown have served as ambassadors of Black history along South Carolina’s Hammock Coast for almost two decades.

A look at the extraordinary lives and careers of Ron and Natalie is in order. 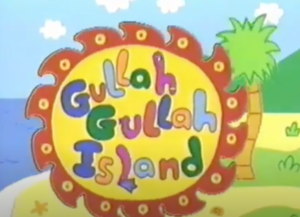 This is the logo of the “Gullah Gullah Island,” a television series on the Nickelodeon Network that Ron and Natalie Daise hosted from 1994-1998.

The couple are widely known for hosting “Gullah Gullah Island,” an American musical children’s television series celebrating the culture and language of enslaved Africans that was produced by and aired on the Nick Jr. programming block on the Nickelodeon network from 1994 to 1998. But before and after that successful program, Ron and Natalie have been passionate performers and educators about the African-American experience.

“Ron and Natalie promote and help to preserve the Gullah Geechee culture and history through their performances,” said Ray Funnye, a long-time friend who serves as director of public services for Georgetown County.

As vice president of creative education at Brookgreen Gardens, Ron Daise is in the perfect position to share the history of enslaved Africans and the Gullah Geechee culture. And Natalie, as a storyteller and artist, brings that culture to life, often performing with Ron.

“Ron and Natalie are creative storytellers and educators,” said Page Kiniry, president/CEO of Brookgreen Gardens. “They celebrate their heritage and culture in a way that makes it accessible and engaging to all.” 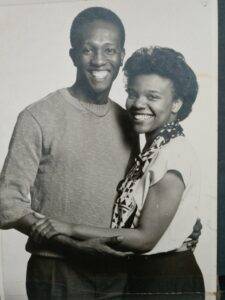 Ron and Natalie met in 1983 on St. Helena Island. (Photo by Kim Craven)

Ron and Natalie met in 1983 at a church service on St. Helena Island in Beaufort shortly after she moved to Lowcountry from Syracuse, New York. Born and raised in St. Helena, Ron was singing in the choir and the two hit it off right away during a dinner held afterward at her aunt’s house.

“Natalie had come from Syracuse, where it is cold,” Ron said. “It was April, things were blossoming and there was sun. She was cute and funny, and we enjoyed each other.”

As the two got to know each other, Ron also discovered that Natalie was also sincere, curious, inquisitive, and multitalented. The admiration was not one-sided.

Natalie recalls that she was struck by Ron’s infectious laugh.

“He’s got the best laugh,” she said. “I loved it from the beginning. It is so full and rich, and you have to laugh when you hear him laugh!”

Ron graduated from Hampton Institute, now Hampton University in Hampton, Virginia, with a major in mass media arts, print and broadcast journalism and a minor in African-American Studies. His first job was as a newspaper reporter at the Beaufort Gazette, then he worked as an information specialist at a nonprofit community-based organization on Hilton Head Island called the Institute for Community Education and Training. He also worked as a developmental studies teacher at Beaufort Technical College.

Natalie started her formal education at Columbia Union College, now known as Washington Adventist College in Takoma Park, Maryland, and finished her undergraduate liberal arts degree at Vermont College and her master’s degree in creative studies later at Union Institute and University. When she first moved to South Carolina, she did secretarial/administrative work for the Department of Juvenile Justice (1983-1985) and the Town of Hilton Head Island (1985-1987).

Shortly after they met, Ron, Natalie and her cousin, Marvin Middleton, formed a trio, singing contemporary and original Christian music. They called themselves Encouragement.

In 1985, Ron and Natalie married and in 1987 began traveling together, performing scenes from Ron’s first book, “Reminiscences of Sea Island Heritage,” at libraries, elementary schools, museums and colleges.

“I had scripted a presentation, which included reading and singing songs about the traditions and customs of the Sea Island community,” Ron recalled. “We sang a cappella, and it was a multimedia production with a slide production of old photos.” 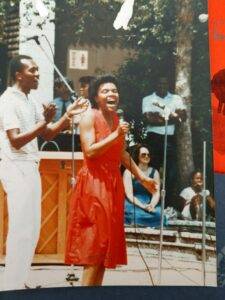 As they traveled around the country, sharing information and performances about Sea Island heritage, they found that many people were appreciative.

“To them, we were not mocking or bringing shame, but more or less informing about the significance of who we are,” Ron said. “They saw that things in our past are worthy of taking note.”

These performances led to Ron and Natalie being chosen as the hosts of “Gullah Gullah Island.” Natalie described this time in their lives as important for many reasons.

Eventually, Natalie and Ron discovered how important it was for people everywhere to be part of their TV family and to see them, a black Gullah Geechee family, daily. Their daughter, Sara, and son, Simeon, were there with them.

“I am still getting messages from people who watched us growing up and felt like we had invited them to be a part of that family,” she said. “I am forever honored and grateful for that.”

Ron and Natalie were nominees for two NAACP Image Awards and a Daytime Emmy Award. Ron and Natalie are recipients of the South Carolina Order of the Palmetto, the state’s highest honor, and a State of Carolina Folk Heritage Award, given for lifetime achievement and excellence in folk art that has enriched the lives of people in their community and state. 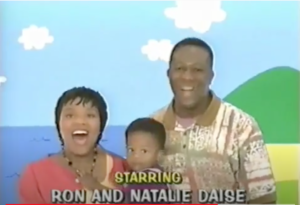 Natalie and Ron, with their son, Simeon, sing the theme song for “Gullah Gullah Island.”

Sara, now 31, is a writer and historian, currently in a PhD program. She lives in Georgetown. Simeon, now 27, is an actor in Los Angeles. Ron and Natalie also have an adopted daughter, 33-year-old Sabrina, who works in information technology in Charlotte, North Carolina.

After “Gullah Gullah Island,” Ron and Natalie moved back to Beaufort. He worked as a proofreader for a printing company. He then served as an English literature teacher, and later as an education specialist at Beaufort High School. It was around this time that Ron performed during an event at Brookgreen Gardens in Murrells Inlet that would become known as Gullah Gullah Days. It was that performance in the Hammock Coast that caught the eye of Larry Henry, who was then the president/CEO of Brookgreen Gardens.

In 2004, Ron was hired at Brookgreen Gardens to run educational programs. Bob Jewell, who served as president/CEO from 2004-2017 and still serves on Brookgreen’s board of directors, came up with Ron’s title of vice president of creative education.

“I wanted to establish a tone of the education programs at Brookgreen, so people knew it wasn’t the same old, same old,” Jewell said. “Ron was the perfect guy to do that. He came up with the vision that made the title work, and he has done a great job.”

Jewell added that he has experienced many of Ron and Natalie’s performances celebrating Gullah Geechee culture, and he is always amazed to see them in action.

“I have always enjoyed Ron’s Gullah Gullah Days program, which have included several different performances of the same material over the years,” Jewell said. “He always has the kids laughing and smiling. It’s a learning experience but also fun.”

Natalie has performed with Ron, as well as a one-woman performance as Harriett Tubman, the Civil War hero who freed hundreds of slaves as part of the Underground Railroad, during Brookgreen’s Nights of a Thousand Candles. Jewell said Natalie’s Tubman performance is inspiring.

“I was in awe of her skills and projections, being able to get herself totally into the role,” Jewell said. “The relationship she developed with the audience, in terms of power of her performance, engaged them with the character and saw her as Harriett Tubman and her words had more impact.”

Beyond their talents as performers, Jewell made note that Ron and Natalie are important ambassadors of Black history. 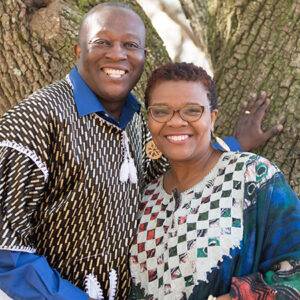 “Both are great communicators,” he said. “They are good role models for us all and their talents speak for themselves. Both of them are great writers, theatrical performers, and they are probably two of the most talented people I know.”

When Kiniry succeeded Jewell as Brookgreen’s president/CEO, she quickly took note of Ron and all that he offers.

“Ron’s rich professional experience on the Gullah Geechee Cultural Heritage Corridor Commission and the Joyner Institute for Gullah and African Diaspora Studies Advisory Board, among other leadership roles, informs his programs and projects at Brookgreen,” she said.

He said he plans to implement a new living history program this spring that features oral histories from Gullah Geechee residents of Georgetown County.

“During the slave trade era, Africans were taken to places like the Virgin Islands, Puerto Rico and Brazil, where they were scattered and dispersed,” Ron said. “This program will explore the connections of language, spirituality and beliefs among all Afrocentric cultures.”

Ron and Natalie Daise of Georgetown have served as ambassadors of Black history along South Carolina’s Hammock Coast for almost two decades. (Photo by Freda Funnye)

As America once again remembers Black history during February, Ron and Natalie were asked what honoring that important history means to them.

“It means being aware of the strengths of a people and being determined and vigilant to live lives that pass on that awareness to others,” Ron said.

“Every time I stand on a stage or at a podium, I sing a song to honor them, embracing my African heritage and the way it connects me to others,” she said. “Learning about who we are and where we come from and what we’ve done and what we can do shapes the future we are moving into. History matters because the future matters.”

For more information about Brookgreen Gardens’ programs and events, visit brookgreen.org. To browse and purchase books by Ron and Natalie Daise, visit amazon.com. 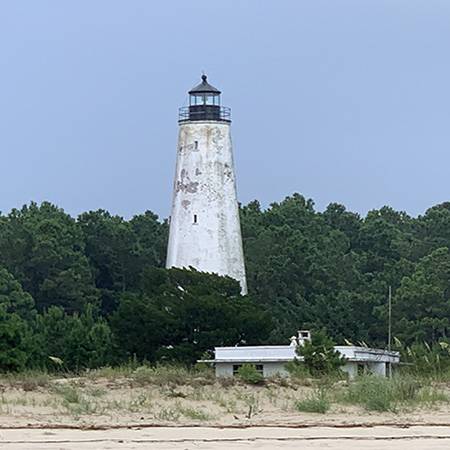 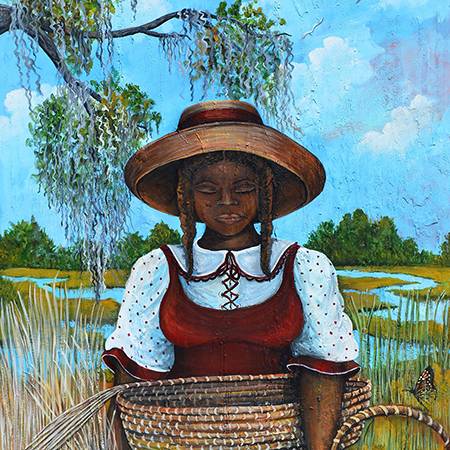