Visitors to Brookgreen Gardens in Murrells Inlet can now view these two exhibits in the Wall Lowcountry Center: “Black Southern Belles,” acrylic and mixed-media paintings of contemporary Gullah Geechee women by acclaimed artist Sonja Griffin Evans; and “Grass in Motion,” sweetgrass sculptures by Antwon Ford, who adds artistic and sculptural elements to traditional Gullah Geechee designs, originally created in West Africa. They will be displayed until March 31 and are free with garden admission. 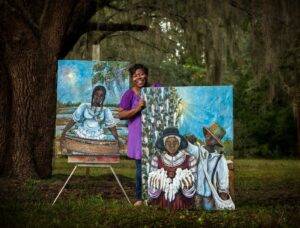 Ron Daise, vice president of Creative Education at Brookgreen, is excited to have these two exhibits on display.

“Part of our mission here at Brookgreen Gardens is to educate people about the culture of this area, of which Gullah Geechee culture is a big part,” he said. “It is important to showcase this as contemporary, living culture, and these two artists certainly pass that on to those who view their art.”

The Gullah Geechee people are descendants of Africans who were enslaved on the rice, indigo and sea island cotton plantations of the lower Atlantic coast, according to gullahgeecheecorridor.org. Many came from the rice-growing region of West Africa. The nature of their enslavement on isolated island and coastal plantations created a unique culture with deep African retentions that are clearly visible in the Gullah Geechee people’s distinctive arts, crafts, foodways, music, and language.

The artwork of Evans and Ford explores those connections.

Evans, an internationally acclaimed Gullah artist and speaker, was born and raised in Beaufort and lives there today. Evans is a highly sought-after speaker and masterful storyteller who is a Pan-African Cultural Heritage Institute fellow. A featured artist for the National Park Service, Evans was selected by the Westin Hilton Head Spa and Resort to commemorate Historic Mitchelville in Hilton Head Island in a permanent display of her work. 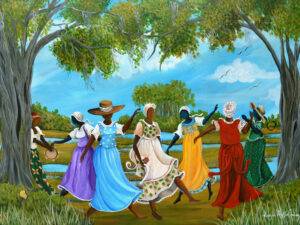 Evans says she feels her “Black Southern Belles” exhibit, which includes 15 acrylic/mixed media paintings of contemporary black women, captures the beauty of the culture while honoring her ancestors.

She agreed with Daise that it’s important to share positive, contemporary images of the Gullah culture.

“Every person of every culture should always see something of themselves being represented in a positive way,” Evans said. “Not only does it give you an appreciation of your own culture, but sheds light on it so others can see the value you offer as an individual or group of people.”

She said that creating contemporary art allows people to relate to it, even people of the same culture.

“To reach a younger generation, or today’s generation, you have to find a way to pass that culture down to them, Evans said. “That way they can gain interest in that culture, and they can relate to how it can be used in their lives today.”

Before her ancestors were enslaved, Evans points out they were living, working and excelling in Africa as agricultural engineers and masterful craftsmen – traits exploited by those who enslaved them. The rice and indigo plantations succeeded because of the knowledge of the Africans brought to America. 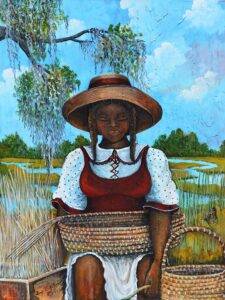 “My ancestors … were enslaved because of their intelligence, skill and what they knew,” Evans said. “That is why I want people to look at these images and understand that they were experts in their fields.”

She urges people to come see the exhibit and experience Gullah Geechee culture.

Like Evans, Ford has similar hopes of bringing Gullah Geechee culture to others through his own Brookgreen exhibit.

Ford began creating sweetgrass baskets at a young age, alongside his grandmother, Albertha Ford. She was one of the dozens of basket weavers who set up roadside stands along U.S. Highway 17 in Mount Pleasant near Charleston.

“People would pull over to the side of the road to take a look at the baskets,” Ford said. “Usually when people stopped by, they would stay for a while and would even sit under our stand with us.”

He said his grandmother’s basket stand was located in the Seven Mile community.

“There were many other stands in the area and I remember them all being occupied during that time,” Ford said. “When I wasn’t playing my Gameboy, there wouldn’t be anything to do at the basket stand except for making baskets, so I had a lot of time to practice.” 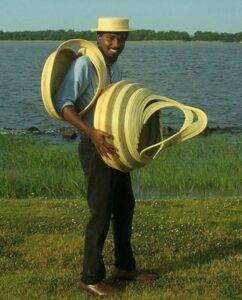 Artist Antwon Ford holds one of his sweetgrass sculptures in his exhibit titled, “Grass in Motion.” (Photo provided)

He describes his artwork as a contemporary expression of a traditional Gullah artform stemming from ancient West African cultures. In this exhibit, “Grass in Motion,” Ford has attempted four out of seven major principles of Gestaltism, which exemplifies the illusion of having a fourth dimension. The exhibit features four of his sweetgrass sculptures.

Ford said Gestaltism, also known as Gestalt psychology, can be extremely helpful in the production of fourth-dimensional art.

“When designed properly, Gestaltism can create an illusion of movement known as a Phi Phenomenon,” Ford said. “To create a Phi Phenomenon in sculpture, I believe mastery and usage of all the major principles are needed.”

He said these principles can also be called the Laws of Gestaltism and many more principles have been added to the science.

He said he feels that his work honors Gullah Geechee culture.

“I would like to think that my exhibit, ongoing work and research honors my heritage by proving that a historical craft once used for agricultural purposes can be used to interpret a modern-day social science,” Ford said.

He added that both exhibits, “Black Southern Belles” and “Grass in Motion,” are related. 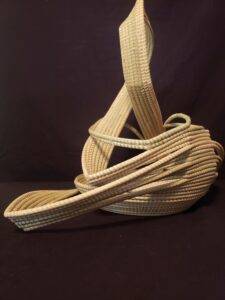 Evans agreed, saying that both exhibits represent artists who not only preserve and educate people about the culture but advance it to the next level.

“I feel we both have an understanding that we are benefactors of our ancestors,” she said. “We are both good stewards to what we have been given and moving it forward.”

Brookgreen Gardens, spanning 9,127 acres, is a National Historic Landmark with the most significant collection of figurative sculpture in an outdoor setting by American artists in the world and its Lowcountry Zoo is the only zoo accredited by the Association of Zoos and Aquariums on the coast of the Carolinas. When people are looking for things to do near Myrtle Beach, Pawleys Island, Litchfield Be

Named by TripAdvisor as one of the Top Ten Public Gardens in the U.S. and one of the Hammock Coast and Myrtle Beach area’s most dearly loved attractions, Brookgreen Gardens’ combination of art, history, and zoo touches the heart and teaches the mind. Boat rides turn into history lessons, a butterfly house becomes a conservation class, and an Enchanted Storybook Forest engages children’s imagination.

For more information about Brookgreen Gardens, visit www.brookgreen.org or call 843-235-6000.

For more about the people helping to preserve the Gullah Geechee culture, click here. 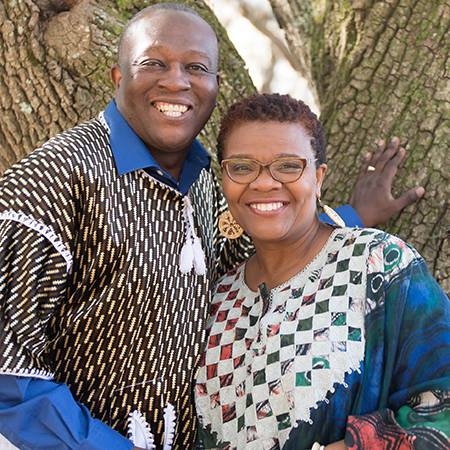 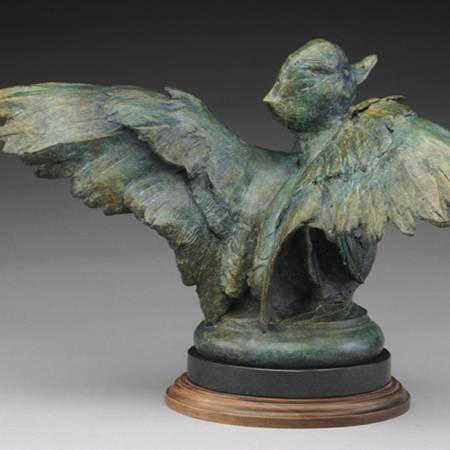