It was a gorgeous, sunny day on Sunday, July 4, for the annual Pawleys Island parade as dozens of floats, trucks, golf carts and more waved flags and displayed their patriotism on the main avenues of the island, a crown jewel of South Carolina’s Hammock Coast®.

Before, during and after the event, five judges from the Town of Pawleys Island’s events committee worked diligently to choose winners, including 10 awards for parade entries, three for houses and three for docks. 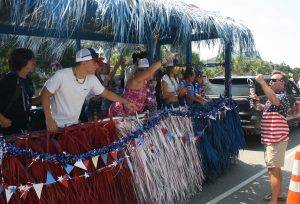 “It was a beautiful day and we had great participation,” Townes said. “I thought the floats people created this year were excellent. They were very original and patriotic, and there seemed to be a lot more floats this year, which is a good thing for the island.” 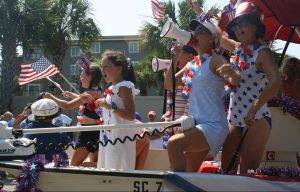 The Guess family won an award for Most Enthusiastic Float. (Photo by Clayton Stairs/Georgetown County Chamber of Commerce) 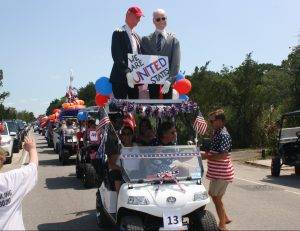 The mayor presents the award for Most Humorous Float to this one featuring Trump and Biden as friends. (Photo by Clayton Stairs/Georgetown County Chamber of Commerce)

Best Dock 3rd – We will Dock You

Attendees of the parade lined Myrtle and Atlantic avenues on Pawleys Island, eagerly awaiting the start of the parade. Near the old Town Hall and across from the new Town Hall was a popular gathering spot. 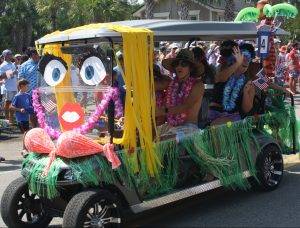 Children in the Welch family designed this float, which won a Best Overall Award during the parade. (Photo by Clayton Stairs/Georgetown County Chamber of Commerce)

There, the Welch family was decked out in red, white and blue, hoping their children’s float would win a prize. They said it was the fourth year the children participated in the parade and they had a great design, with a palm tree in back and yellow in the front. The float, which was #4, won a Best Overall Award.

Freddie and Linda Matt of Pawleys Island were also being patient for the start of the parade. They said they have been coming to the parade to celebrate our nation’s independence since 2008.

“It is just a fun time, with amazing people showing their love for this country,” Freddie Matt said. “Every time has been a good time.”

Linda added, “The music, the excitement, that’s what I like!”

ALONG THE ENTIRE SHORELINE
OF THE HAMMOCK COAST®

Around 1 p.m. on July 4, folks on the Hammock Coast beaches were dazzled by the “Salute From the Shore,” a military flyover with several large and small aircraft, both modern and vintage. 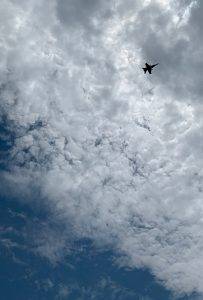 People on the coast experienced a military flyover on July 4th. (Photo by Mark Stevens/Georgetown County Chamber of Commerce)

The Salute From the Shore travels the entire South Carolina coast, starting in Horry County and ending in Beaufort County. The Hammock Coast offers some of the best viewing for the Salute, so residents and visitors alike at encouraged to gather on beaches in south Garden City, Murrells Inlet, Litchfield Beach, Pawleys Island and DeBordieu Colony near historic Georgetown.

The Salute first began on July 4, 2010. Assisted by a C-17 from Charleston AFB, the event has grown in popularity each year. 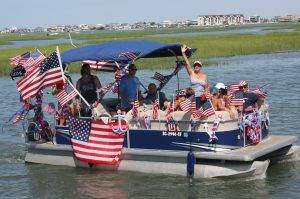 Dozens of boats, decorated in patriotic colors and messages could be seen from the shore during the Murrells Inlet Boat Parade. (Photo by Clayton Stairs/Georgetown County Chamber of Commerce)

The parade wound from Garden City Point through the Murrells Inlet Marsh Walk, all the way down to Hot Fish Club. The theme for the 2021 event was “Stars, Stripes and Fireworks.”

To encourage more participation, the committee decided to waive the boat entry fee this year, according to Lee Hewitt, co-chairman of the Murrells Inlet Boat Parade. Awards were not distributed this year either, he said.

The Hammock Coast’s largest fireworks show, the annual Fourth of July Fireworks on the Marsh Walk, started at 10 p.m. This family tradition was well-attended and many people stayed in the Marsh Walk area the whole day, enjoying live music and some of the best seafood in South Carolina.

Residents and visitors of North Litchfield Beach and their golf carts were decked out in red, white and blue to participate in the annual Golf Cart Parade from 10 to 11 a.m. Not the largest July 4th event, this parade gave residents and visitors an opportunity to show their patriotism in a variety of designs.

Litchfield Beach and Golf Resort hosted an Independence Day Celebration event on Saturday, July 3, from 5-8 p.m. in the Magnolia Lawn & Courtyard. There was live music and a cookout, as well as kids activities and inflatables.

Kaminski House Concert on the Lawn

The Kaminski House Museum presented a 4th of July concert featuring the Indigo Choral Society on the lawn of the historic home starting at 6:30 p.m. Highlights of the concert included a Color Guard and songs from the American genre, Carolina-themed songs and a salute to the Armed Forces. 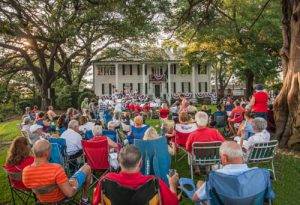 Participants were encouraged to bring lawn chairs, favorite snacks and beverages and celebrate a hometown Fourth of July.

This year’s fireworks in historic Georgetown began at 9:30 p.m. and launched from East Bay Park.

• Who are some of the most popular residents of South Carolina’s Hammock Coast®? Why these goats, of course.

• Before there was a United States of America, there was Hopsewee Plantation, and it’s back open for tours.

• Discover 5 paths to Gullah Geechee culture on the Hammock Coast.

• If golf is your bag, then you’ve come to the right place when arriving on the Hammock Coast. 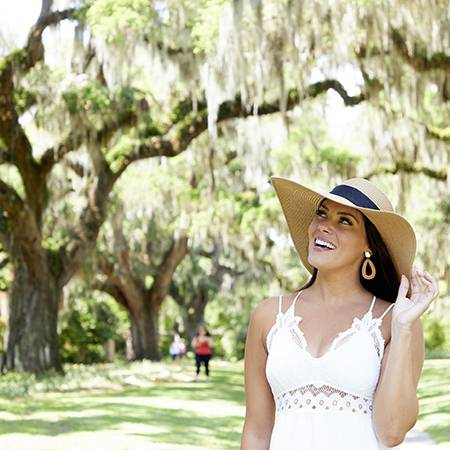 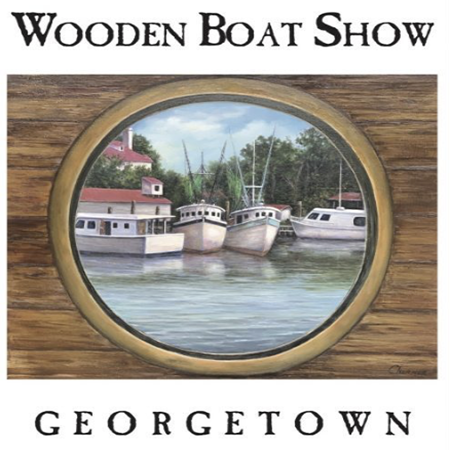