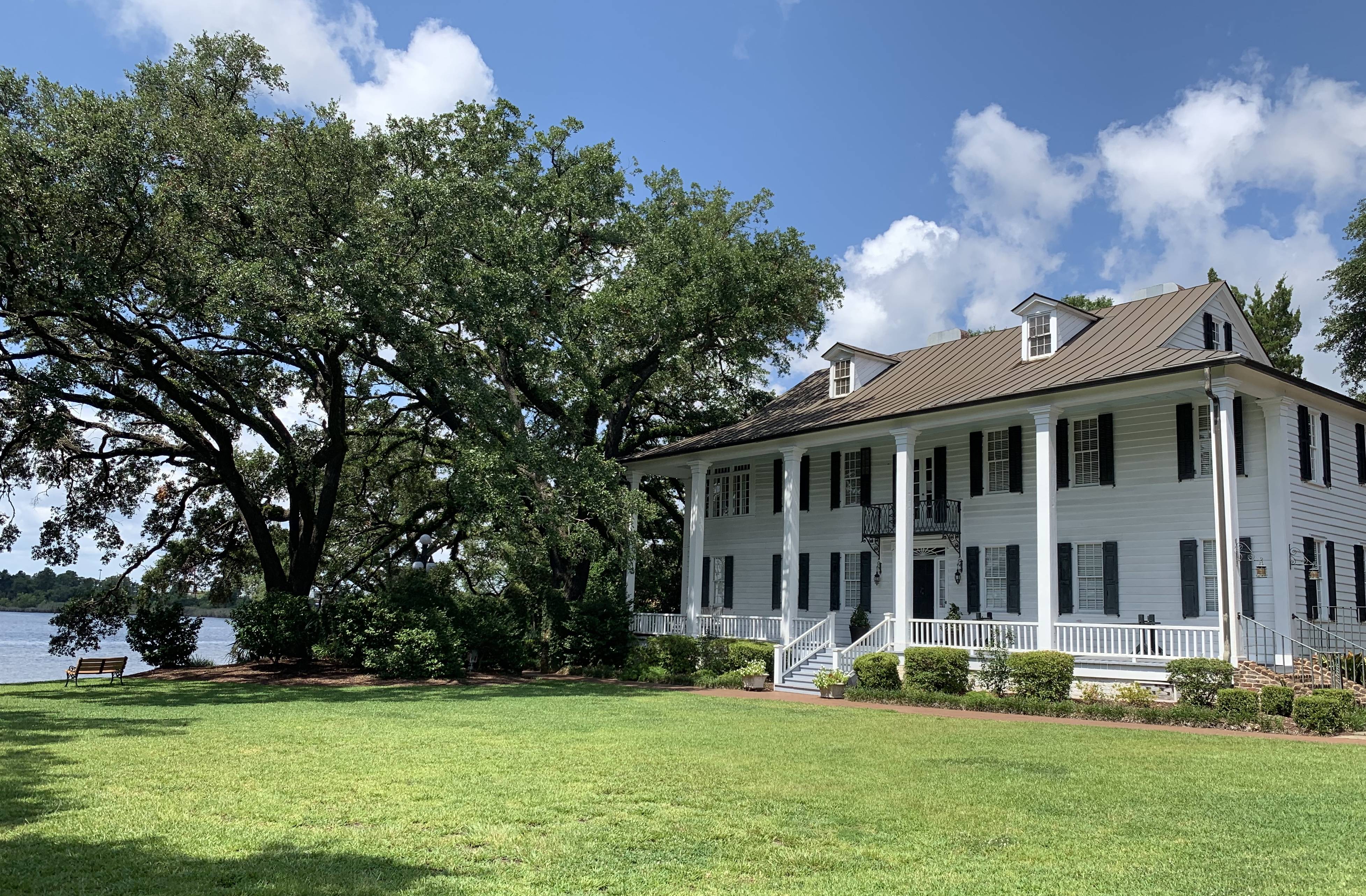 Located in a nearly 250-year-old house overlooking the Sampit River, the Kaminski House Museum features artwork and antiques from the Lowcountry, Europe, the Middle East, China, and more. The house was built in 1769 in the heart of Georgetown’s historic district by Paul Trapier, a leading merchant of South Carolina. Over the years, the Kaminski House has been owned by prominent Georgetonians including John Keith, Georgetown’s first mayor; Sheriff Edward Martin; and business owners Thomas Daggett and George Congdon. It was purchased by Harold and Julia Kaminski in 1931. Harold served as mayor of Georgetown in the late 1940s. He was the son of Heiman Kaminski, one of Georgetown’s most prominent merchants during the latter part of the 19th century. Upon Julia Kaminski’s death in 1972, the colonial-era house was willed to the City of Georgetown for use as a museum.

Today, the museum is run by the Friends of the Kaminski House, a non-profit organization, in partnership with the City of Georgetown. The Museum Store, which sells a variety of locally and regionally made items, helps support the mission of the museum. The house is open to the public Monday-Saturday, with guided tours of the house start on the hour or by appointment. Admission is $12 for adults; $10 for seniors; and $6 for students (ages 6-17). There is no admission fee for children 5 and under.

Located in the Old Market Building behind Georgetown’s iconic Clock Tower and in the adjacent Kaminski Hardware Building, The Rice Museum – which is celebrating its 50th anniversary in 2020, exhibits a permanent collection of dioramas, maps, paintings, artifacts and other displays that tell the history of rice cultivation in Georgetown County. The Kaminski Hardware Building houses the Rice Museum’s Maritime Museum Gallery, the Rice Museum Gift Shop and the Prevost Art Gallery.

Of particular significance are the remains of the “Brown’s Ferry Vessel,” which was built in the early 1700s and sunk in approximately 1730. The remains are on permanent display in the third-floor gallery. The oldest vessel (it predates, by 50 years, all vessels previously found) of colonial manufacture on exhibit in America, it is nearly 50 feet long and was a general-purpose freighter used on the rivers and coastal waterways during the 1700s. Discovered in 1974 at the bottom of the Black River near the Brown’s Ferry crossing, the vessel was reconstructed and treated by the University of South Carolina until it was brought to the museum in 1992.

Visitors can also view the film, “The Garden of Gold,” which tells the compelling story of the rice culture in Georgetown County.

The museum is open Monday-Saturday with tours available throughout the day, with the last tour at 3 p.m. Admission is $7 for adults; $5 for seniors; and $3 for students (age 6-21). There is no admission charge for children under 6.

Much of the history of South Carolina can be defined by its attachment to and love of the sea. There are endless stories connecting the sea to agriculture, commerce, military, recreation, education, and how ships and their crews and builders played a role. The South Carolina Maritime Museum tells these stories through interactive exhibits, rare artifacts from the maritime industry, model ships and artwork, educated volunteers and staff, and special programs for the young and old.

The museum is home to the prized Fresnel lens of the old North Island lighthouse. The museum, which recently added a second floor with additional exhibit space, is directed and funded by the Harbor Historical Association. Major exhibits at the museum have included a model of the ship Henrietta, the largest wooden sailing ship ever built in South Carolina, along with text and photographs describing the lumber boom in the 1870s when the ship was created; artifacts discovered during shipwreck dives off the South Carolina coast; and samples of fossils, including those of megalodons, sharp-toothed whales and mosasaurs, which were found along the South Carolina coast.

There is no admission fee. Take a virtual tour of the museum here.

At the Georgetown County Museum, visitors can take a step back in time as they experience the history and artifacts of “the old South” in Georgetown, the third oldest city in South Carolina and at one time the wealthiest area in the U.S. Displaying more than 300 years of history and culture, the Georgetown County Museum offers a glimpse into the earliest maritime industry of the 1730s when the city was an international port of entry; the drama of Francis Marion, known as the “Swamp Fox,” hiding and attacking British troops from nearby marshlands; through the prosperity of indigo and rice cultivation and, later, the lumber industry.

Recent additions to the museum include a 1773 bell which stood next to the original kitchen at the old Greenwich Plantation House, built before the Revolutionary War; and a 5-gallon syrup jug created by “Dave the Slave,” also known as “Dave the Potter,” who lived from 1800 to the mid-1870s.

The museum is open Tuesday-Saturday. There is no admission charge.

A National Historic Landmark, Hopsewee Plantation is the birthplace of Thomas Lynch Jr., a signer of the Declaration of Independence. Built circa 1740, the house is a typical Lowcountry rice plantation dwelling. Hopsewee is a preservation rather than restoration and has never been allowed to fall into decay. Only four families have owned it, and it is very much the same as when first built. The privately owned home is open from attic to cellar and is furnished with 18th- and 19th-century furniture.

The newest jewel on this gracious property is the River Oak Cottage. Named one of the state’s top tearooms, its English tea service is flavored with Hopsewee’s southern charm along with a delectable assortment of sweet and savory treats. Dining is available Tuesday-Saturday from 11 a.m. to 3:15 p.m. To make a reservation or to see the menu, go here.

A natural preserve and wildlife refuge, Hobcaw Barony was also the winter residence of presidential adviser and Wall Street millionaire Bernard M. Baruch. Open to the public through guided tours, you see the 13,500-square-foot mansion Baruch called home and where he hosted visitors such as President Franklin D. Roosevelt and Sir Winston Churchill. Other stops on the 17,500-acre refuge include the grounds and stables of Bellefield Plantation, a ride through the only existing slave street left on the Waccamaw Neck, and a stroll along a salt marsh boardwalk. The Visitors Center features a small nature/history museum with two alligators, a saltwater touch tank, a touch table, videos and many other exhibits to entertain adults and children.

The Belle W. Baruch Foundation is a private nonprofit foundation created through the vision of Belle Wilcox Baruch. Established as a trust at her death in 1964, the foundation’s primary mission is to conserve Hobcaw Barony’s unique natural and cultural resources for research and education. Belle’s own history is a story not to be missed!

Most tours, which are available daily, are $20 per person. The two-hour bus tour requires little walking and includes highlights of Hobcaw Barony’s 16,000 acres of history and ecology.

“Hunnah!” That’s “Welcome” in the Gullah language created by the Africans brought to the Sea Islands in Colonial times. Learn all about the Gullah people and the work to preserve their history and culture at the Gullah Museum in Georgetown.

This small museum and shop features the best of the Lowcountry’s crafts, Gullah collectibles, story quilts, sweetgrass baskets, dolls, wood carvings, African artifacts, books and historical papers, tours and genealogical research, among other areas of interest. It also offers lectures and seminars on Gullah history and culture. Andrew Rodrigues is respected for his knowledge of the history and culture of Gullah people and oversees the museum, which he co-founded with his wife, the late Vermelle “Bunny” Rodrigues. He conducts discussions, lectures and seminars on the contributions of the Gullah people to the development and success of the Carolina rice culture and other local Gullah historical and cultural issues.

There is no admission fee.

Even if you aren’t staying in a vacation rental on Pawleys Island, a trip to the historic seaside resort island is a must for any trip to South Carolina’s Hammock Coast. Visitors can take a trip across the causeway and enjoy the barrier island’s historic markers that provide a history of the antebellum summer homes there. Many of these homes are still available for rentals.

Pawleys Island is known as one of the oldest summer resorts on the East Coast. The families of rice planters who owned plantations on the nearby rivers first settled Pawleys Island in the early 1700s. Pawleys continues to be known for its shoeless, carefree, laid-back lifestyle, which includes crabbing in the adjacent creeks, fishing, the stories of ghosts, the rope hammocks and the unspoiled, unsophisticated, casual, delightful stretch of wide beach and sand dunes.

Public access is also available to Pawleys’ pristine beach, routinely named not only one of the beaches in South Carolina but also the world.

Georgetown has number of historical churches, including Prince George Winyah Episcopal Church, the oldest religious body in Georgetown. Bethel AME Church was home to the first separate African American congregation and is full history. The current sanctuary was built in 1882 and is part of the National Registry of Historic Places. In addition, the Hebrew Cemetery of Georgetown dates to the 1760s, and All Saints Church in Pawleys Island is among the area’s most popular places of worship.