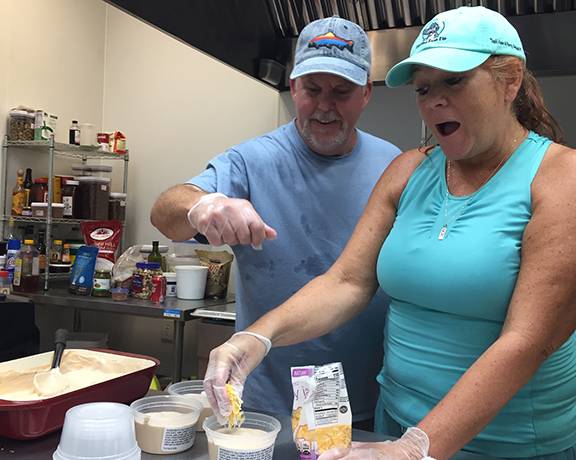 Steve Walden and Kim Leatherwood in the Georgetown commercial kitchen where they whip up their Carolina Bean Dip. (Photo by Clayton Stairs/Georgetown County Chamber of Commerce)

If Kim Leatherwood were to spill the beans on how she’s found success in her new business venture, she could point to a series of events – and people – who were part of the story.

Still, it’s the delectable taste of her Carolina Bean Dip that has people talking – and snapping it up in locations throughout South Carolina’s Hammock Coast.

The Pawleys Island resident, known to many for her work as deputy director of the Kaminski House Museum in Georgetown, has been making her bean dip for friends and family for years, but it was only in September 2019 when she decided to offer it commercially. To make that happen, she partnered with her fiancé, Steve Walden, also of Pawleys, who just happened to be one of the early fans of Kim’s culinary skills.

The couple now creates the bean dip with simple ingredients — sour cream, refried beans and cheese for the basic version, with a few other ingredients, like jalapeno peppers and pepper jack cheese, added for a spicier version – in the South Carolina Department of Health and Environmental Control-approved commercial kitchen in Indigo Mercantile of Georgetown.

“It is pretty healthy for a snack food,” Kim said. “You can eat it on tortilla chips, or tacos, or mix it in scrambled eggs!”

Featured in Southern Flavor Magazine’s Spring 2020 issue, Carolina Bean Dip can be found in local stores, including Kudzu Bakery & Market in the Litchfield community of Pawleys Island, Lee’s Farmer’s Market in Murrells Inlet and, of course, Indigo Mercantile. Steve also sells it on weekends at local farmer’s markets. The price is $6 for a 12-ounce container.

“By the end of the year, we want to have it in 10 retail stores in South Carolina, and then we are going to look into selling it regionally,” Kim said. “We are now working on the next flavor, chipotle cheddar!”

Renting the kitchen at Indigo Mercantile has been an important factor in the business venture’s early success.

“There are a lot of people who are helping us market Carolina Bean Dip, and get it out there, but being able to make it at Indigo Mercantile is key,” Kim said. “Once you start selling retail, you have to use a DHEC-approved kitchen to make the food item. You can’t just make it at home.” 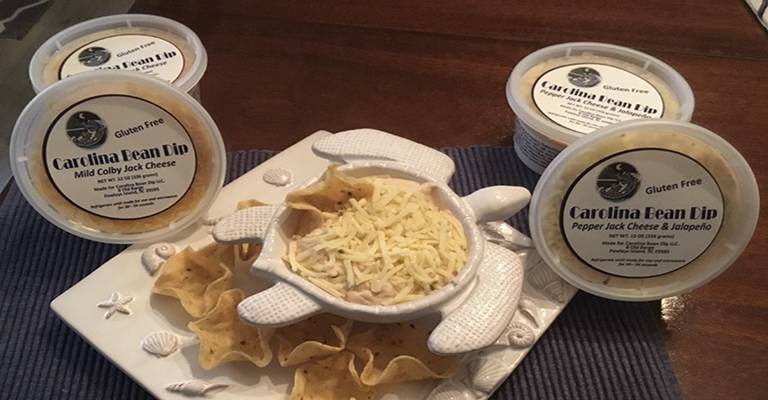 Carolina Bean Dip is now available in three locations in Georgetown County, but Kim Leatherwood, who invented the recipe, hopes to have it 10 locations throughout South Carolina soon.

Laura Renwick, spokesperson for DHEC, explained that a commercial kitchen, like the one in Indigo Mercantile, is considered a “Shared-Use Operation” under Regulation 61-25 and is designed to provide farmers, caterers, gourmet-food producers, and others interested in the production of food items, a facility to prepare food products.

“Shared-use operators … are licensed by SC Department of Agriculture to sell (wholesale) food products to others to retail,” she said.

Michael Caldwell, co-owner of Indigo Mercantile with his wife, Melanie Hine, said he enthusiastically offers Carolina Bean Dip in his store, saying, “If it’s local, I want it!” The store offers a variety of products, including national and local brands, but Caldwell said he’s happy to have the opportunity to not only provide a place where Kim and Steve can create their signature snack but also sell it.

“Our building used to serve as a restaurant, so we rebuilt the kitchen and it is way more than what we need it for,” Michael said. “We would like more people to know that we have a commercial kitchen to make products, or to prepare food for catering events.”

When Kim started making – and, eventually, selling – Carolina Bean Dip out of her home about a decade ago, she was a divorcee providing an after-practice snack for her teenage sons, Ethan and Dylan, and their teammates on the Waccamaw High School Warriors baseball team.

“So, one afternoon, I was sitting there watching these huge baseball boys come through the front door and I didn’t know what I was going to feed them,” Kim said. “I went to my cupboards and threw something together.”

And that was the simple origin of what is today sold commercially as Carolina Bean Dip.

But, in the beginning, it was a favorite of her sons’ friends, who started asking her to make more so they could take it home to their parents. Soon, friends and neighbors asked her to make it for parties, and Kim would make small batches and offer them for sale. And then she met Steve.

Living in the same neighborhood in Pawleys Island, Steve was staying with his father, Jimmy Walden, who was helping Kim with repairs to her house. Steve’s father brought home some of Kim’s bean dip, and, for Steve, it was love at first bite.

“My dad was doing some odds and ends for them and brought home some dip,” Steve said, who started asking for more and more dip. While he was certainly a fan of Kim’s recipe, he later spilled the beans that his true intention in asking for more dip was an excuse just to meet Kim. Yes, beans can be romantic.

Recently, as the two made a batch of Carolina Bean Dip in the Indigo Mercantile kitchen, Kim recalled being surprised that one person would want to eat so much bean dip.

“I wasn’t buying it from you. I was buying it for you, to meet with you,” he said with a smile as he stirred the pepper jack cheese into a large container of the bean dip mixture. 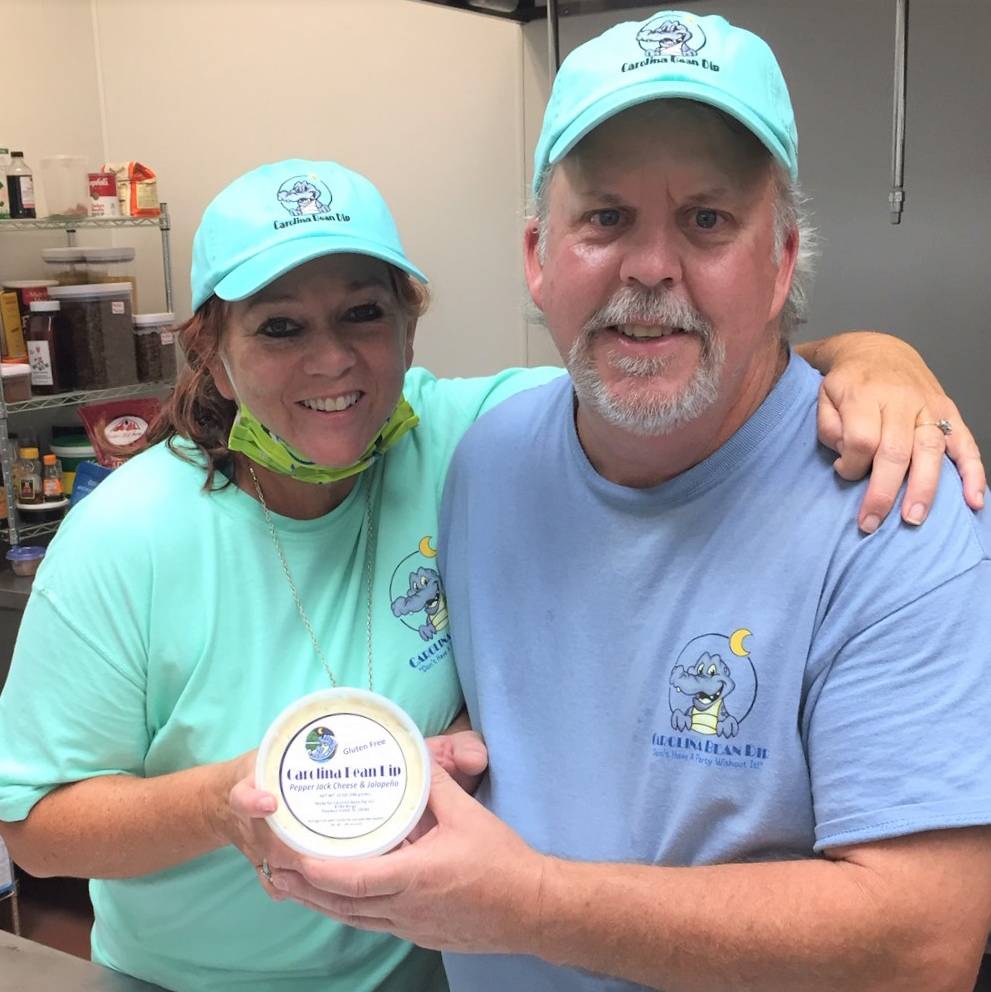 Perhaps it was all kismet. With Steve’s background in sales and management, and Kim’s background in marketing and graphic design, theirs is a partnership certainly worth a hill or two of beans.

Stacy Rabon, co-owner of Kudzu Bakery & Market with her husband, Joey, said she is excited to sell Carolina Bean Dip in her store. Kudzu, which has been in business since 1989, is a specialty food store that also has a location in Mount Pleasant and will be opening one soon in Conway.

“I’ve known Kim for a while, so when she brought some of her dip by to sample, we all tried it and we liked it,” Stacy said. “Local is great, but that isn’t enough for us to carry a product. It has to taste great, too!”

Kim said she urges anyone who would like to start selling a product through retail to explore their options. “We always tell people that if you have a new product, don’t give up,” she said. “If it’s good, you can sell it!” 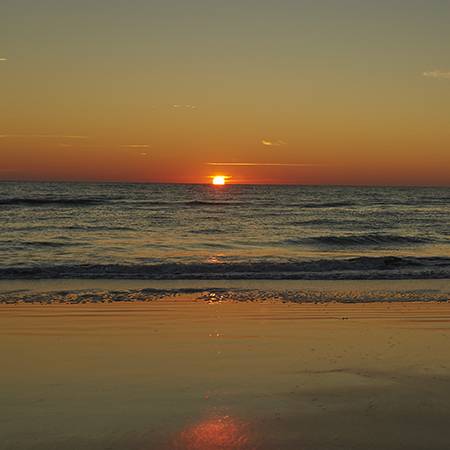 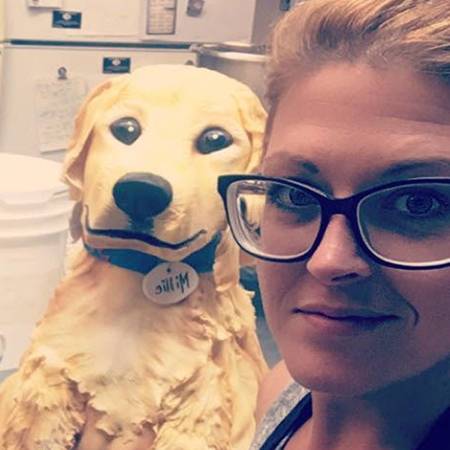