For visitors and locals, The Moveable Feast combines love of books with love of food

For visitors and locals, The Moveable Feast combines love of books with love of food

Book enthusiasts who also enjoy a variety of delicious cuisine have an amazing opportunity while visiting South Carolina’s Hammock Coast.

For more than two decades, the Moveable Feast has offered the best of both worlds: local, regional, and national authors speaking about their books, and local restaurants providing the best of their tasty creations.

Linda Ketron, who started the Moveable Feast in January 1998 as a six-week course for CLASS (Community Learning About Special Subjects), said it started out small, but has evolved into something very special.

“In the beginning, the Moveable Feast featured a variety of local folks – historians like Lee Brockington (before she’d published any books), authors like Alberta Quattlebaum, musicians like Tom Fox, and Lowcountry characters like Oscar Vickd, who was an author, artist, storyteller and chef,” Ketron said. 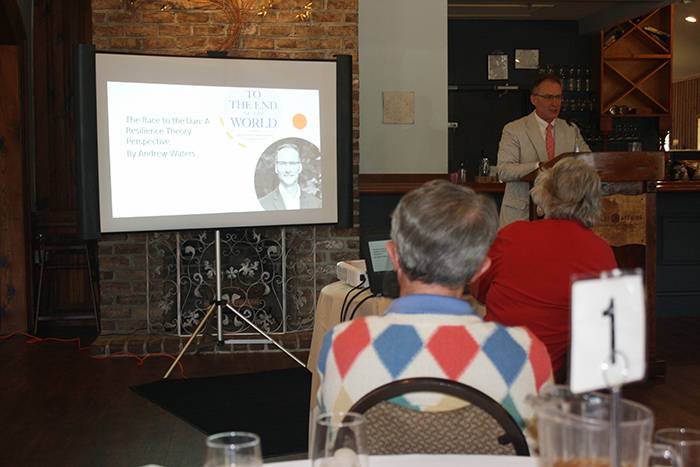 Author Andrew Waters speaks about his book detailing Revolutionary War history, “To the End of the World: Nathaniel Greene, Charles Cornwallis, and the Race to the Dan,” at a recent Moveable Feast event. (Photo by Clayton Stairs/Georgetown County Chamber of Commerce)

“It was so popular, that CLASS offered a second series, then a third and so on. Around 2002, Tom Warner of Litchfield Books asked to partner with me, by contacting publishers who send their authors on tour,” Ketron said. “From that point, the feast was pretty much author-oriented, although to wrap up each season, I typically schedule a musical event.”

So, for almost 20 years, Litchfield Books, now owned by Olivia Meletes-Morris, has scheduled the authors, while Ketron has scheduled the venues and worked with the restaurants, provided publicity, booked the reservations, and emceed the events. She said what makes the Moveable Feast special is that there is nothing quite like it being done anywhere else.

“We’ve delivered great speakers, great books, great food, and great friendships weekly — not once a month or once a quarter which some other locations do, but every week,” Ketron said.

The literary feasts often include personal history, literary inspirations, trials of publishing, anecdotes from book promotion tours, and selected readings from past, present, or future works, Ketron said. Usually lasting about 50 minutes, with a little time for questions from the audience, the presentation is followed by book sales and signing while the wait staff serves lunch.

“For each feast, the venue chef prepares a unique menu, typically unavailable during the restaurant’s public hours,” Ketron said. “Many of the restaurants are only open for dinner but open at lunch for the Moveable Feast.” 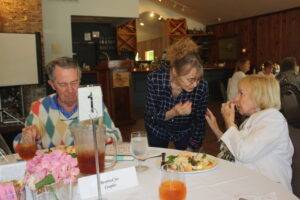 Linda Ketron, who started the Moveable Feast in 1998, talks with the Hoyles of Pawleys Island during a recent event. (Photo by Clayton Stairs/Georgetown County Chamber of Commerce)

The luncheons range in size from 30 to 300. In order that the featured guest can enjoy his or her lunch as much as the participants, the presentation precedes the meal. Individuals, couples, friends, book clubs and other groups are assigned table seating, and many lasting friendships have resulted, Ketron said. Each literary luncheon is followed by a book signing at Litchfield Books for those unable to participate in the meal. 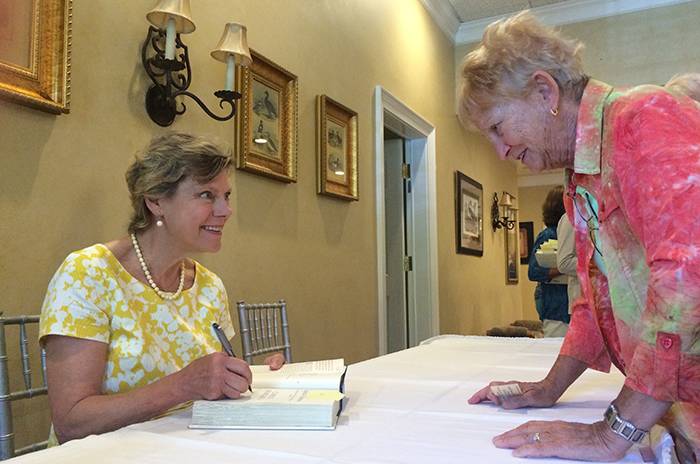 Author, historian and noted journalist Cokie Roberts signs a copy of her book on June 12, 2015, at The Moveable Feast in Pawleys Island. (Photo by Mark A. Stevens/Georgetown County Chamber of Commerce)

Andrew Waters, an author who recently gave his second presentation at the April 23 Moveable Feast at Inlet Affairs Banquet Hall in Murrells Inlet, spoke about his second book detailing Revolutionary War history, “To the End of the World: Nathaniel Greene, Charles Cornwallis, and the Race to the Dan.” Waters says he enjoyed both events immensely. His first book is titled, “The Quaker and the Gamecock: Nathanael Greene, Thomas Sumter, and the Revolutionary War for the Soul of the South.”

“These events offer a really great, laid-back atmosphere that is much more fun than going to a bookstore and doing a reading,” Waters said. “The way the audience engages with the author seems to be more interactive than some of the other events I’ve done for my books.”

His presentation involved descriptions of “thrilling escapes,” “daring river crossings” and “cataclysmic war erupting in the Carolinas,” leading to a neck-and-neck chase to Virginia’s Dan River with the fate of the American South hanging in the balance. Though today the Race to the Dan is a little-known footnote of the American Revolution.

Attendees of the April 23 Moveable Feast said they enjoyed Waters’ presentation and learned something new about the Revolutionary War.

“He was very interesting, and he presented a part of the Revolutionary War that I didn’t even know about,” said Jennifer Carter, who has attended many Moveable Feasts over the past few years. “I love history, especially the Revolutionary and Civil wars.”

Randy and LoAnn Cogliser, a couple from Connecticut who now live in Surfside Beach, agreed.

“I know a lot about the Revolutionary War, but I didn’t know how much of it happened down here,” Randy Cogliser said. “It was very informative, but I’m sure the book goes into a lot more detail.”

Bill Hoyle, a volunteer tour guide at Hobcaw Barony, said he and his wife have attended many of the Moveable Feast events but he wanted to come to this event because he is very interested in the subject matter. He is originally from Greensboro, North Carolina but owns property in the Pawleys Island area.

“American History is my background, and the author was talking about the community where my father and his family lived, Guilford County, so that is what attracted me,” Hoyle said. “I learned a little bit about what happened around the time of the Guilford Court House Battle.”

Each of these literary enthusiasts said the Moveable Feast is a one-of-a-kind event.

“Linda Ketron has done a wonderful job bringing local, regional and national authors to the area,” Carter said. “Also, we get to experience these great restaurants that host the events, which are sometimes places you might not ever try otherwise.”

“The Moveable Feast is very informative and I always learn something,” she said. “Even if the book is just a beach read book, there is always some nugget that I didn’t know before.”

The Moveable Feast is held at area restaurants throughout the year on Fridays, 11 a.m.-1 p.m. On occasion, an author’s book tour schedule is accommodated with a mid-week Moveable Feast. Most of the feasts are $30, although in some instances the publishers require the purchase of the book with the feast ticket. For a schedule of Moveable Feast events and to make reservations, call 843.235.9600 or visit www.ClassAtPawleys.com. 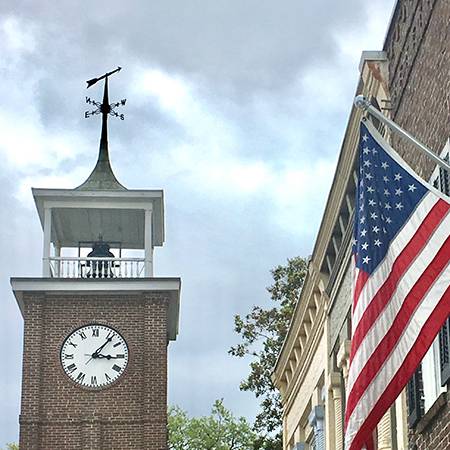 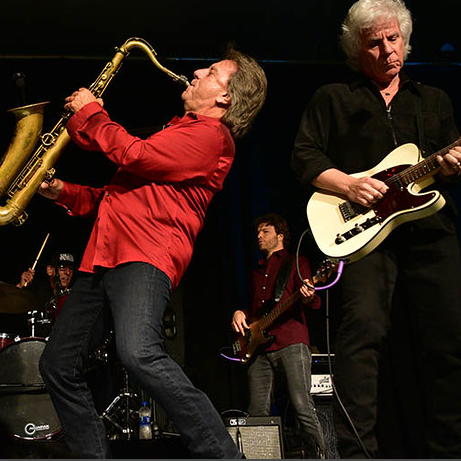