As brothers Jerry and Roy Caines work side by side in a small shed on their humble property near Georgetown, an observer might not realize they are witnessing history –– and talent that has survived through three generations on South Carolina’s Hammock Coast.

Carving intricate, life-sized duck decoys from tupelo wood, Roy makes the rough cuts, creating the shape and contours of the duck, and then Jerry takes over, providing the detailed work. The result is art that can be purchased online or at annual outdoor festivals like the Wooden Boat Show, held every October in Georgetown. 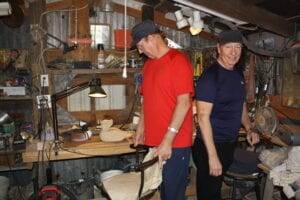 Roy, left, and Jerry Caines stand in their workshop where Roy does the rough cuts for duck decoys and Jerry creates the intricate details. (Photo by Clayton Stairs/Georgetown County Chamber of Commerce)

“People ask how we get along so well together,” Roy said, after finishing his brother’s sentence. “We say it’s simple. We don’t compete with each other. I know what I can do well, and Jerry knows what he can do. We work together as a team.”

Known as the Caines Boys, Jerry, 72, and Roy, 67, are continuing a family legacy started by their grandfather, Joseph “Hucks” Caines, and their great-uncles, known as the Caines Brothers. Three of the brothers worked with Hucks as hunting guides for Bernard Baruch, owner of Hobcaw Barony, in the early 20th century. Today, the original Caines Brothers’ duck decoys, created in the early 20th century, are among the most sought-after South Carolina decoys in existence, and only 50 are known to have survived.

“There is no genre of South Carolina folk art that is fractionally as valuable as the best Caines decoys,” said Dick McIntyre, owner of Virginia-based Collectable Old Decoys and long-time collector and dealer of antique American decoys. 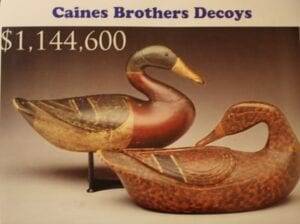 In fact, one of the most famous examples of a Caines Brothers decoy is the “snakey-neck mallard” from 1910, which sold for the staggering price of $189,000 in the late 1980s, but that was nothing compared to a pair of Caines Brothers decoys that were auctioned off for more than $1.1 million in the summer of 2018. That money went to the owners of the decoys.

McIntyre said aside from the sculptural elegance of some of the decoys, their historical associations are extremely strong.

“Documentation exists of the most powerful, socially prominent men of the 19th and early 20th centuries hunting over these decoys, some of whom took a decoy home as a souvenir of their Georgetown hunt,” McIntyre said. “Presidents, admirals, diplomats and foreign dignitaries enjoyed the art of the Caines floating sculpture, while duck hunting in Georgetown.”

Hobcaw Barony, which is now a 16,000-acre research reserve, is one of the few undeveloped tracts on the Waccamaw Neck. The Native Americans who first lived in the area called it “hobcaw,” meaning “between the waters.” In 1718, the land became a colonial land grant, or barony. Sold and subdivided into plantations, the land was part of profitable rice production until the beginning of the 20th century.

In 1905, Bernard M. Baruch, a Wall Street financier and adviser to U.S. presidents, purchased the property as a winter hunting retreat. After 50 years, he sold all the land to his daughter, Belle Baruch. At the time of Belle’s death in 1964, she created a foundation to manage the land as an outdoor laboratory for colleges and universities in South Carolina.

Lee Brockington, coordinator of public engagement at Hobcaw Barony, says the Caines brothers were hand carving decoys for Baruch, many of which were monogrammed “BMB” on the bottom and were kept in the rafters of a large boathouse near Hobcaw House.

“When machine-made decoys became widely available, fewer carved decoys were created and by the middle to late 20th century had become collectibles,” Brockington said. “As an art form, Caines Decoys are beautiful, expressive and highly prized by their owners and their admirers.”

Today, the Caines Boys’ art brings attention to Hobcaw Barony history and attracts visitors who want to come and see where the Baruchs hunted and where the Caines Brothers guided, worked and carved those valuable decoys.

“Jerry and Roy not only promote their own family legacy and craftsmanship, but, by extension, they celebrate the relationship between owner, employee and nature,” she said.

Jerry said Buddy McCutcheon, formerly of Georgetown and manager of the former Scoville Hardware, was the one who originally suggested that he and Roy should carve decoys, just as their ancestors had, and also that Jerry should write a book about carving decoys and the Caines family, which he did. That book is titled “A Caines Family Tradition: A Native Son’s Story of Fishing, Hunting and Duck Decoys in the Lowcountry.” 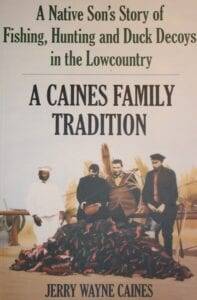 This book by Jerry Caines shares the history of the Caines Brothers lives, fishing and hunting in the woods of Hobcaw Barony.

The book shares the history of the Caines Brothers lives, fishing and hunting in the woods of Hobcaw Barony, as well as the reasoning behind Baruch’s decision to work with them instead of against them.

“The Caines brothers lived hard. They made moonshine and sold it as well as drank it, hunted and lived off the land,” Jerry Caines writes in the book. “Baruch, knowing of their abilities, offered them jobs as hunting guides. … Besides, since they were already living there, he couldn’t keep them from hunting on the land. … All accepted the offer to go to work for Baruch, except Ball, who refused to work for this man. He always felt Baruch had stolen the land from the Caines family and he simply didn’t like him.”

Continuing their family’s legacy of creating world-renowned, hand-crafted wooden duck decoys, Jerry and Roy are hoping that they will not be the end of the line for Caines decoys. Neither of them married and had children to pass on their talents, but they do have several nieces and nephews.

They say that although their decoys don’t fetch those astronomical prices their grandfather’s and great uncles’ decoys have, their decoys have won prizes and sold well at festivals, including the Winyah Bay Heritage Festival (in the past) and, more recently, the Georgetown Wooden Boat Show for the last 10 years.

The Caines Boys duck decoys have won many ribbons at festivals. They say when they sell one, the ribbon goes with it. (Photo by Clayton Stairs/Georgetown County Chamber of Commerce)

Roy said he and Jerry call their award-winning duck decoys their “ribbon birds” and the ribbon goes with them when they are sold, usually for $2,000-$3,000.

“The bird won the ribbon,” he said, “so the ribbon goes with the bird.”

Jerry said that attention to detail is what sets the Caines Boys’ decoys apart from others.

“When you look at it close, you’ll see a green sheen in that black,” Jerry said, pointing to details on one of their decoys. “Then you look here, and you see a little purple color and a green color. That’s the way ducks are.”

He said the technique to create that effect is called dry brushing.

“You put some green on the brush,” Jerry explained, “then you wipe it all out until just a little bit is left, then you scrub it onto it.”

The Caines Boys say it is unfortunate that their grandfather’s and great uncle’s decoys are selling for hundreds of thousands of dollars about 100 years after they made them. Jerry commented that their decoys might sell for $2 million 100 years from now, but they won’t be around to see it.

Jerry and Roy are also quick to point out that they also create miniature decoys, as well as a variety of wooden sculptures and more –– everything from World War II submarines and ships to other wildlife like a bald eagle and other birds of prey. Jerry also creates paintings ranging from a landscape of the Georgetown Lighthouse to a fantasy painting of a dragon in the sky, representing a hurricane approaching. 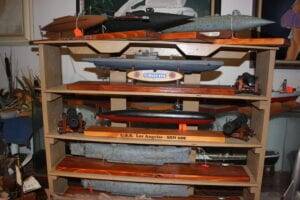 The Caines Boys also create other artwork, including these historic submarines. (Photo by Clayton Stairs/Georgetown County Chamber of Commerce)

Georgetown residents and historians Paige Sawyer and Debby Summey have both known Jerry and Roy and note that the brothers should be commended for continuing the family legacy. Sawyer, who has known the brothers for about 30 years, said he worked with the Caines Boys when they began displaying their work at the Winyah Bay Heritage Festival. He was on the board of directors for the event.

“They are just very talented individuals who don’t seek publicity or recognition,” Sawyer said. “I think it’s great that they are able to continue what their grandfather and relatives created, and I’m glad to see them getting some recognition.”

He credits McCutcheon with convincing the brothers to renew the family tradition of creating duck decoys.

“Buddy was very instrumental to get them to display at the Winyah Bay Heritage Festival and future trade shows so that they would be recognized for their talent,” Sawyer recalled. “If it hadn’t been for Buddy, they wouldn’t have become as well known. He was the driving force behind their success!”

Summey said she met the Caines Boys about 15 years ago when she served as the director of the Georgetown County Museum, which has an exhibit honoring them. She said the brothers would tell her about playing with the original Caines decoys when they were children and how some were even used as firewood.

“They were toys to them, so they would tie strings around their necks and drag them around,” Summey said. “Nobody knew what the original Caines decoys would be worth one day!”

Intricate details can be seen on this Caines Boys decoy. (Photo by Clayton Stairs/Georgetown County Chamber of Commerce)

Roy Caines said that they kept some of those old decoys, but they were stored outside and deteriorated long before they knew what they were worth. Summey added that she admires the craftsmanship of the Caines Boys’ decoys.

“One thing I like about their decoys is they are realistic and authentic, and the fact that they were never professionally trained at carving or painting,” Summey said. “They learned on their own how to do this, without taking lessons from somebody, like it is in their genes and passed down to them. I think that is remarkable!”

For more information or to commission artwork from Caines Boys Decoys, visit the men’s Facebook page at www.facebook.com/cainesboysdecoys, email them at cainesboysdecoys@yahoo.com, or call 843-546-7812. 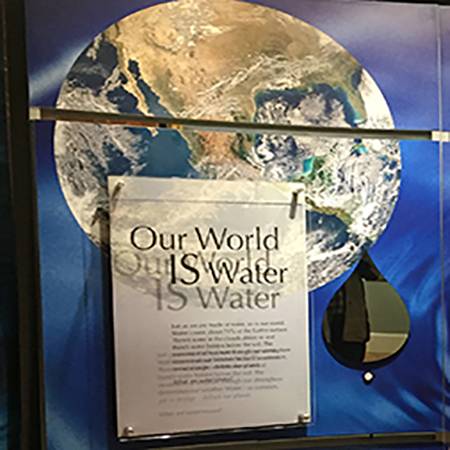