The country’s best college fishing teams will converge on South Carolina’s Hammock Coast for shot at a national championship!

Winyah is a coastal estuary that is the confluence of the Waccamaw River, the Pee Dee River, the Black River, and the Sampit River. Winyah Bay is the fourth-largest estuary on the U.S. East Coast and home to many aquatic and terrestrial species – and, clearly, a favorite for anglers. The historic port city of Georgetown is located on the bay.

University of South Carolina anglers Patrick Walters and Tyler All, both from Summerville, qualified for the 2017 Bassmaster College Series National Championship via their win on Winyah Bay. While they came up short in the tournament, the 2017 field featured five current Elite Series anglers. (Photo courtesy of Bassmaster)

The Bassmaster College Series Championship will field as many as 130 teams of anglers representing universities across the nation. Qualifications are based on the teams’ finishes in four regular-season stops held on Florida’s Harris Chain of Lakes, Lake Norman in North Carolina, Arkansas’ Norfork Lake and Saginaw Bay in Michigan. A final Wild Card tournament on Alabama’s Logan Martin Lake gives teams waitlisted for the other events one last chance to make it into the field for Winyah Bay.

“We’re excited to offer college anglers an incredible championship tournament experience,” said Glenn Cale, B.A.S.S. Nation tournament manager — College, High School and Junior. “I am thrilled that we are able to get these young anglers onto this extraordinary tidal fishery as they compete for a national title and a chance to fish the Classic.”

Winyah Bay has hosted two major B.A.S.S. events — Elite derbies in 2016 and 2019 — along with several B.A.S.S. Nation regional championships. The most recent Bassmaster College Series tournament on Winyah Bay in 2017 featured a pair of familiar names atop the leaderboard. Current Elite Series pros Patrick Walters and Jonathan Kelley finished first and second en route to the 2017 National Championship, where they were bested by a team that included fellow Elite angler Jacob Foutz.

“We are thrilled to welcome college anglers and their families to Georgetown County for the Bassmaster College National Championship in September,” said Beth Goodale, Georgetown County director of recreation and community services. “A number of activities and events are planned throughout the weekend so that our citizens can celebrate along with tournament participants.”

Mark A. Stevens, director of tourism development for the Georgetown County Chamber of Commerce, noted that the Hammock Coast is known far and wide for its myriad fishing opportunities.

“Many, many people come here to enjoy our pristine beaches,” Stevens said, “but we have plenty of folks who come here to fish, too. Be it on our rivers, on Winyah Bay or fishing on the Atlantic Ocean, we have fishing opportunities for everyone. When my nephew visits from Tennessee, he spends all his time out with this fishing pole. He’s been known to bring back supper, too!”

For the college tournament, competitors will not only be fighting for a national championship, presented by Bass Pro Shops, but also a berth in the 2023 Academy Sports + Outdoors Bassmaster Classic presented by Huk on the Tennessee River via the College Classic Bracket tournament. 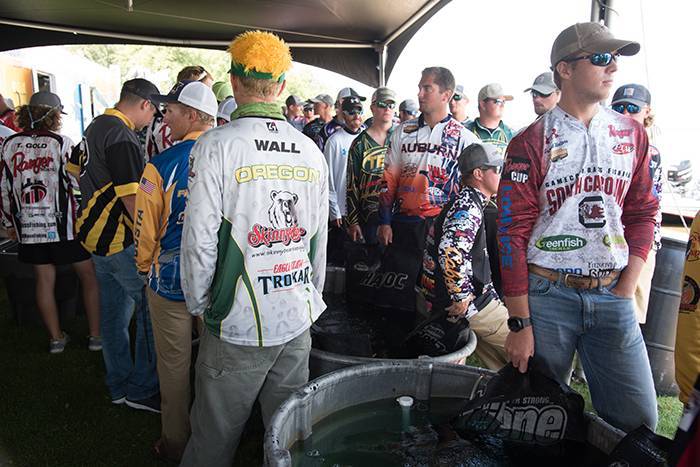 College anglers at the 2017 tournaments held on Winyah Bay in 2017. (Photo courtesy of Bassmaster)

In addition to presenting sponsor Bass Pro Shops, other sponsors are:

B.A.S.S., which encompasses the Bassmaster tournament leagues, events and media platforms, is the worldwide authority on bass fishing and keeper of the culture of the sport, providing cutting edge content on bass fishing whenever, wherever and however bass fishing fans want to use it. Headquartered in Birmingham, Alabama, the 515,000-member organization’s fully integrated media platforms include the industry’s leading magazines (Bassmaster and B.A.S.S. Times), website (Bassmaster.com), TV show, radio show, social media programs and events. For more than 50 years, B.A.S.S. has been dedicated to access, conservation and youth fishing. 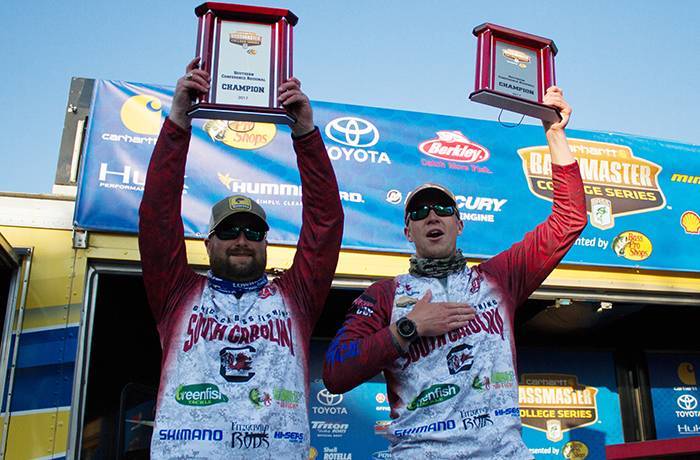 Winyah Bay’s importance as goes back centuries as fishery and locations for myriad wildlife. The entrance to the bay is flanked by North Island, South Island and Cat Island. Today, the first two islands and most of the third comprise the Tom Yawkey Wildlife Center, as the islands were willed to the South Carolina Department of Natural Resources by Tom Yawkey, former owner of the Boston Red Sox.

Georgetown County’s casual charm and Southern hospitality earned it the nickname of the Hammock Coast. Adventure and relaxation blend together in perfect harmony, like the flowing and ebbing of waves on the county’s famed beaches. With six communities – Garden City, Murrells Inlet, Litchfield Beach, Pawleys Island, Georgetown and Andrews – comprising the pristine coastal area between Myrtle Beach and Charleston, visitors can experience South Carolina’s Hammock Coast like never before.

Georgetown offers an abundance of accommodations for guests, including hotels and cozy bed and breakfasts. Georgetown marinas welcome boaters from around the globe. The beach communities of the Hammock Coast — only minutes from Historic Georgetown — offer beachfront homes, condos and more for those who want to expand their stay beyond the tournament.