Spotting a bald eagle, our nation’s symbol, soaring high above or perhaps perching in a tall tree, can be a magical experience.

To celebrate National Bald Eagle Watching Month, which is January, residents and visitors of South Carolina’s Hammock Coast® can enjoy seeing these majestic birds in several locations. Those locations include three of the area’s most popular destinations: Hobcaw Barony, Huntington Beach State Park and Brookgreen Gardens. Georgetown, Litchfield Beach, Pawleys Island and Murrells Inlet – all communities of the Hammock Coast – are spots where eagles are often spotted soaring and sometimes in trees. 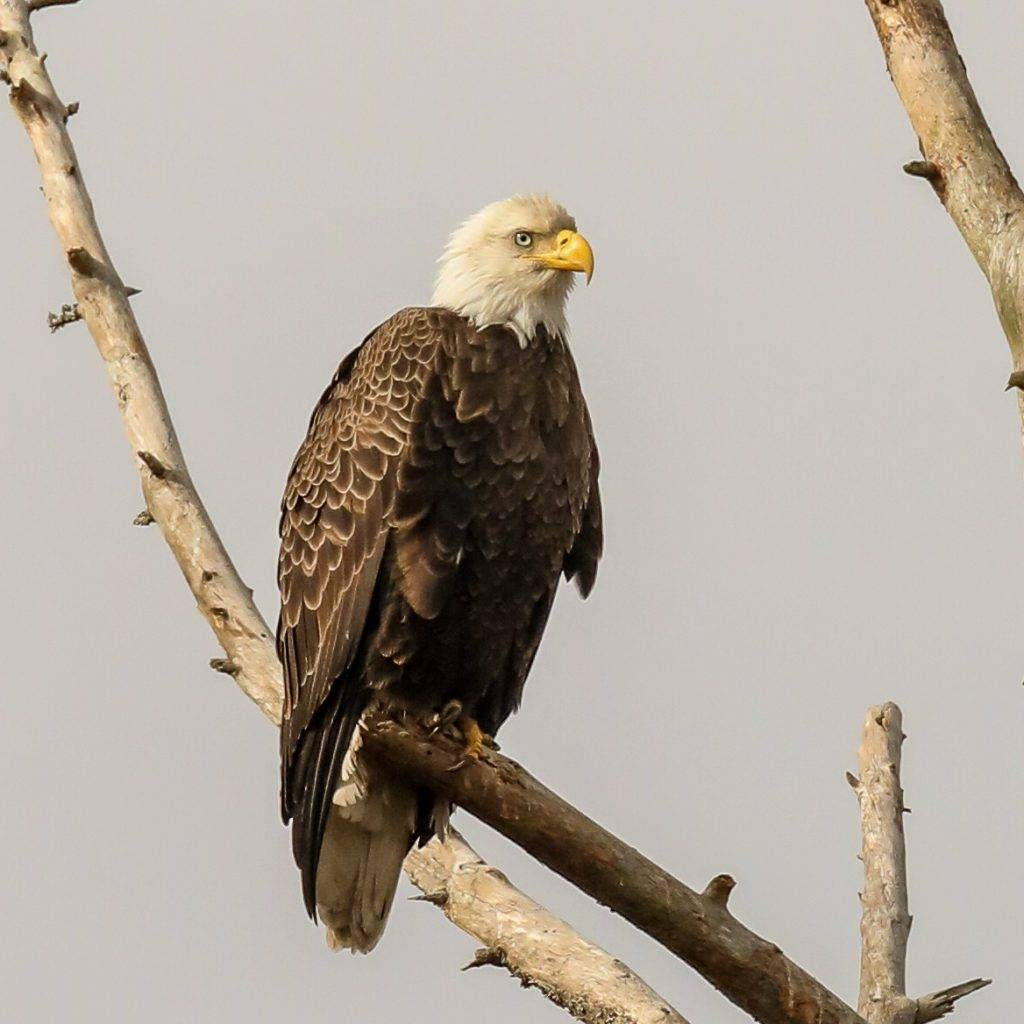 Bald eagles can sometimes be seen perching in a high tree on South Carolina’s Hammock Coast. (Photo by Natalie Chapman)

Richard Camlin, senior interpreter at Hobcaw Barony, said there are as many as five nests on the 16,000-acre research reserve owned by the Belle W. Baruch Foundation, just north of Georgetown on U.S. Highway 17.

“I just saw a pair flying yesterday at about 2:30 p.m. and they were calling to each other,” Camlin said recently. “I was trying to think what they sounded like and the best I could come up with was a (shopping) cart being pushed that had squeaky wheels.”

He said Hobcaw Barony is a good place to see the birds anytime, but since all tours of the property are by bus, people may miss them. Hobcaw Barony’s 16,000 acres encompass a rich diversity of every common ecosystem found on the South Carolina coast, making this an unparalleled site for research in the environmental sciences. In addition, more than 70 cultural sites on the plantation including cemeteries, slave cabins, and the Baruch’s homes all provide a time capsule for educators.

“When we get out at Hobcaw House, we often see bald eagles over the bay,” he said. “If you follow the shore by boat, you can see them a pretty good bit.”

Camlin said he has also seen bald eagles flying in the morning while standing outside the Discovery Center, just off U.S. Highway 17, as well as Hobcaw Point fishing pier between the two bridges leading to Georgetown from the north. Bald eagles have also been seen at the Georgetown County Landfill, south of Georgetown.

Brenda Magers, manager of Huntington Beach State Park, said bald eagles can often be observed from the scenic causeway leading into the park. 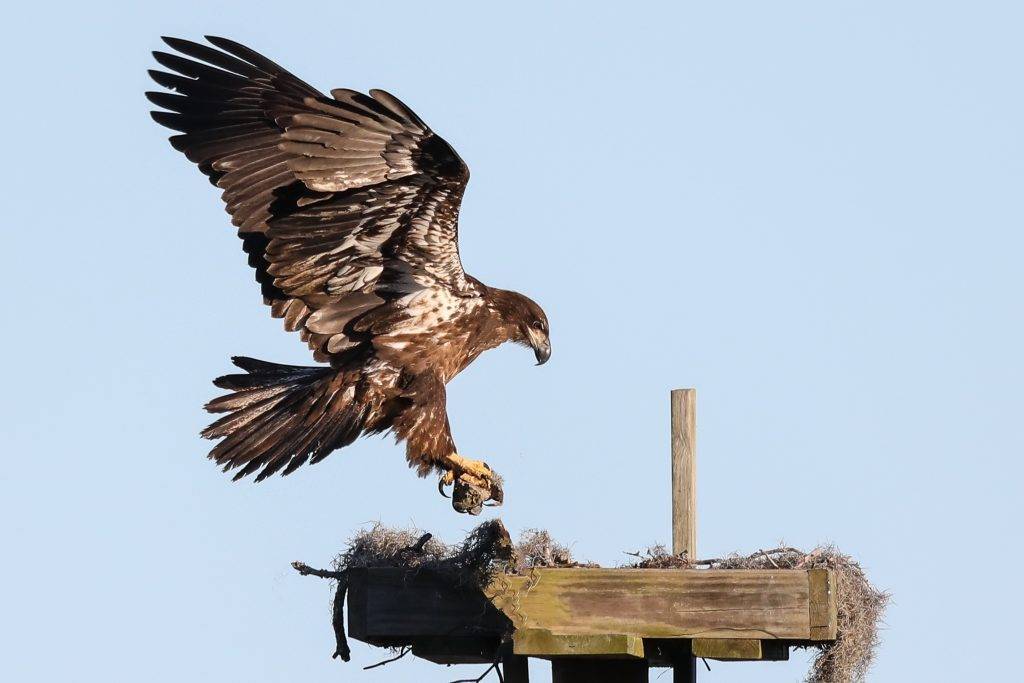 This juvenile bald eagle is raiding an osprey’s nest. Its head has not yet turned white. (Photo by Natalie Chapman)

“There are several nesting pairs in the area so be on the lookout for juvenile birds, as well,” she said.

Magers explained that bald eagles do not develop their characteristically white head for two to three years.

“Even with their brown plumage, eagles can be identified from a distance by their wing position while soaring, she said. Eagles hold their wings in a flat position, often rocking as they soar, while the similarly sized vulture holds its wings in a V-position.”

She added that bald eagles at Huntington Beach State Park are “true pirates” and can often be seen perched in trees lining the marsh waiting on an Osprey to catch a fish.

“They will quickly swoop in, practicing kleptoparasitism, and harass the Osprey until they drop the fish,” Magers said. “A much easier meal than fishing for yourself!”

Huntington Beach State Park, located in Murrells Inlet, includes 2,500 acres of marshland and forests, and three miles of pristine beaches. It also offers 173 campsites and three picnic shelters. Visitors can enjoy watching some of the 300-plus species of birds in the park and explore the National Historic Landmark, Atalaya, the winter home of Archer and Anna Hyatt Huntington.

Mike Walker, a senior ranger at the park, said he has seen four bald eagles, two of which are younger birds with dark-colored heads. He said they may be a family. 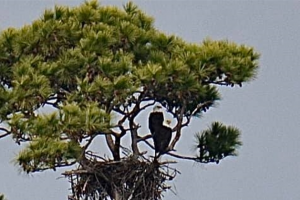 “The younger birds may be their previous chicks,” Walker said. “No way to know for sure, but they are frequently seen in the dead pine tree on the edge of the marsh to the left when you come over the marsh. One has a partially white head, and the other doesn’t.”

If people would like a guarantee to see bald eagles up close, they can also visit the Lowcountry Zoo at Brookgreen Gardens. Marketing Director Lauren Joseph said there are two rescued bald eagles in an enclosure at the zoo.

“They have been injured and are unable to fly, so we keep them in an enclosure that is sized to keep them from taking a fall and further hurting themselves,” she said. “They can’t fly, but with their strong beaks, they could still climb very high.”

She said there are also bald eagles living in or near Brookgreen Gardens, a National Historic Landmark and non-profit organization located near Murrells Inlet. Founded in 1931 by Anna Hyatt Huntington and Archer Huntington, Brookgreen is home to the largest and most significant collection of American figurative sculpture in the United State and is a leader in sculpture conservation, environmental conservation and the protection of the plants, animals and history of the South Carolina Lowcountry. 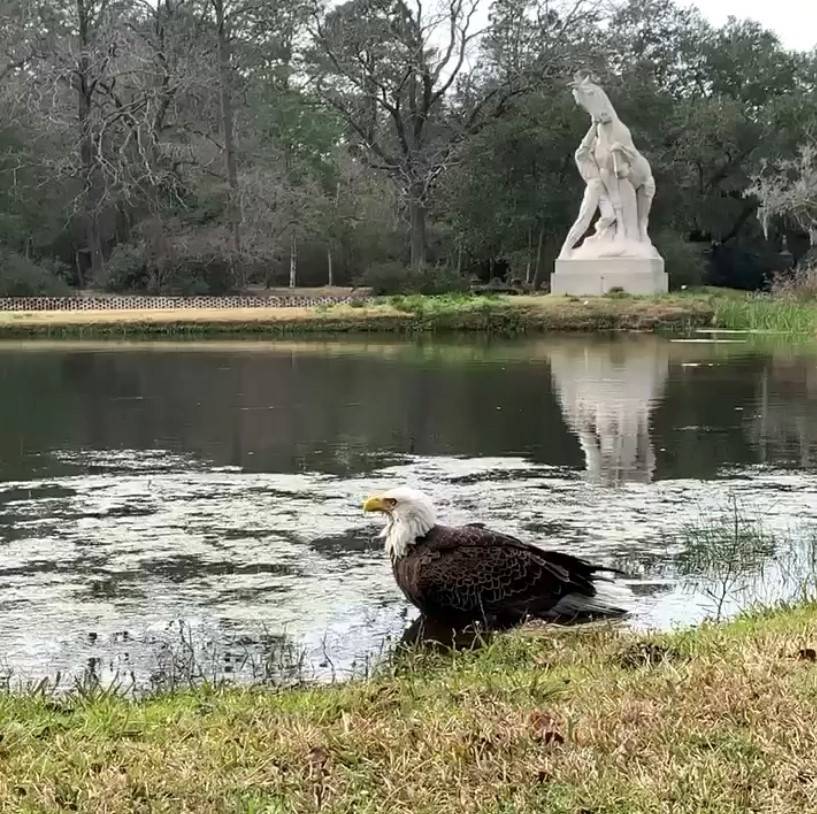 One of the wild bald eagles often seen at Brookgreen has even been seen bathing in the pool in front of a featured sculpture titled “Youth Taming the Wild,” Joseph said.

“Usually, the best chance to catch eagles soaring or hanging around is in the mornings – right when we open,” Joseph said. “Many folks may see bald eagles in the wild and not realize that is what they are – they don’t develop the white head and tail feathers until they are 4 to 6 years old.”

She added that bald eagles eat fish and small mammals, but are also scavengers, sometimes eating roadkill animals or trash on the side of the road.

“That apple core someone throws out of a window attracts a rat or other small mammal to it – and then the bird swoops down on the prey, but in taking off again hits a passing car,” Joseph said. “We try to spread the message to never throw anything on the shoulder of a road – even if it is something like an apple core or banana peel that you may feel isn’t technically ‘litter’ — because those food stuffs will attract animals that could be injured by traffic.”

South Carolina’s Hammock Coast, located between Myrtle Beach to the north and Charleston to the south, is considered one of the best areas in the Palmetto States for birdwatching. In fact, Southern Living has declared the Hammock Coast as the best place to see birds on the entire East Coast.

More than 300 species of birds have been spotted at Huntington Beach State Park.

Noted Murrells Inlet photographer Steve Ellwood highlighted the birds of the Hammock Coast in his book, “In the Moment: A Photographic Journal By Steve Ellwood.”

Here are some other facts from an article about National Bald Eagle Watching Month that people may not know about this magnificent bird:

All facts were drawn from Live Science, the NWF, and the Animal Fact Guide. 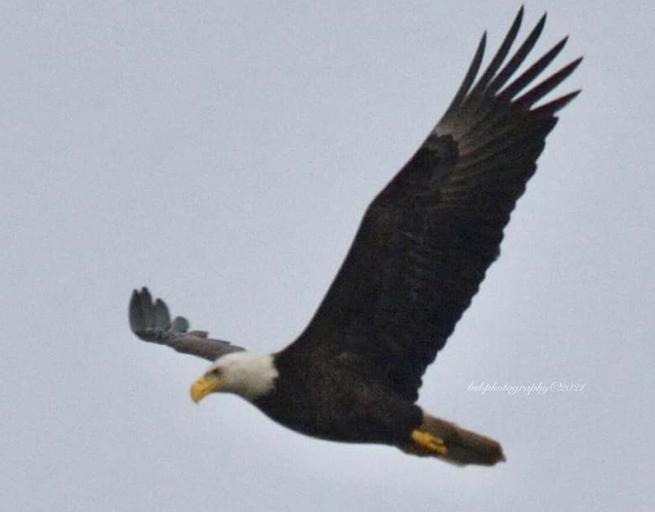