Spooky legends and ghost stories on South Carolina’s Hammock Coast are well known by many locals, but they may be new for some visitors to the area.

These tantalizing tales include the Gray Man, a misty figure on the beach who warns of impending hurricanes; Alice Flagg, a young girl who searches for her lost engagement ring long after her death; Crab Boy, who drowned in the marsh while attempting to catch a stone crab bare-handed; and the Hag, who unravels her skin to fly through the night and hex those who lie awake.

For people seeking an eerie evening, Huntington Beach State Park hosts a series of ghost tours at Atalaya, the historic, Moorish-style home that some believe resembles a castle, the perfect spooky location for people to hear these stories. Tours, which are free with park admission, are from 8:30-9:30 p.m. on Fridays through the end of August 2022. They will start up again in June 2023. The home was once occupied by Archer and Anna Huntington, the namesakes of the state park and founders of nearby Brookgreen Gardens.

Another opportunity to hear these and other stories at Atayala is the upcoming Atalaya Sleepover set for Nov. 12 and 13, 2022. It will be a night of fun-filled adventure including s’mores and ghost stories by the campfire, a house tour, a scavenger hunt, a nighttime beach walk, morning wildlife walk and much more. Dinner and continental breakfast are also included at $50 for adults and $30 for children ages 6-15.

Interpretive Park Ranger Mike Walker, who leads the Atalaya Ghost Tour, the Atalaya Sleepover and other events at the park, said he enjoys sharing these tales passed down through the generations on the Hammock Coast, especially at Atalaya, which is a Spanish term meaning Watchtower.

“Commonly referred to as the Castle by locals, Atalaya looks like it should be haunted,” he said, “with its labyrinth-like maze of corridors, ornate iron grill work on the windows, vine-covered walls, and a watchtower looming over it all.”

Archer Huntington, who was the heir to a fortune his father made by being one of the inventors of the Transcontinental Railroad that united the East Coast and West Coast of the United States. He met Anna later in life when she was a world-famous sculptor, who grew up in a family that prized the outdoors, nature, and art.

Anna’s father was a paleontologist who studied Ice Age mammals like woolly mammoths, mastodons, and giant ground sloths. Her mother was a watercolor painter.

The Huntingtons came to the South Carolina coast because Anna was diagnosed with Tuberculosis and they wanted to build a winter home. While in this area, they came upon an ad for a hunting club built on the remnants of four former rice plantations.

Walker said Atalaya resembles a coastal fortress, built hundreds of years ago, but its “watchtower” actually served as a water tower, supplying water to the rooms of the castle. He said it also had another purpose originally: harboring bats to combat mosquitos.

“The Huntingtons hit on a more practical way of avoiding mosquitos and that was living here only in the wintertime,” Walker said. “So, it was never much of an issue.”

Walker is quick to mention that Atalaya, itself, is not haunted. He explained that the two main requirements of a ghost story — someone dying and someone having unfinished business — just never happened at Atalaya.

“I would love to tell you how crazy-haunted Atalaya is, but it is not,” Walker said. “You just don’t have the makings of a good ghost story here.”

He said that no one ever died at Atalaya and that the Huntingtons had no unfinished business since they were very wealthy and had anything their hearts desired.

“They were very well connected, and they both lived long lives,” Walker said. “There is almost nothing that the Huntingtons wanted to do that they didn’t get a chance to do.”

Even though it is not haunted, Walker said Atalaya is the perfect place to hear spooky tales.

“These tales are a form of edutainment; entertaining while slipping in some education,” he said. “Without even realizing it, visitors learn about tides and hurricanes, where seafood really comes from, and much more about our coastal way of life.”

Huntington Beach State Park Manager Brenda Magers said that the combination of Walker and the backdrop of Atalaya make this a worthwhile tour.

“Atalaya is a unique and eclectic location,” she said. “Once inside, the exposed brick, dark setting and historic feel blend to set the perfect stage for a ghost story.”

She said a good storyteller will draw the audience in with “relatable characters, a good back story, and a side of heart break.”

“Mike is able to spin a tale in a way that draws you in,” Magers said. “However, don’t get too comfortable. He knows just when to land an emphatic punch line to make you jump.”

Reactions about the tour

Tour-goers who have experienced Walker’s spine-tingling way of sharing these stories say his voice is what makes all the difference.

Hailey Johnson from Cincinnati, Ohio, was with a group of friends on the tour. She said she was amazed how Walker spins these local legends.

“He has a way of projecting his voice and grabbing your attention,” she said. “He can also make you feel like you are there with the characters in those stories.”

Johnson added that Atalaya is a great location to hear ghost stories and scary tales.

“It is so spooky in the hallways and rooms of the castle at night,” she said. “That really added to the suspense and thrill of these stories.”

Jerry Perkins was with his wife, Nicole, and their children, Samantha, 17, and James, 11.

“I thought it was great,” Perkins said. “We came down last week to see Atalaya, and we thought we would come back for this tour.”

“I enjoyed hearing some history about everything back here in the park,” she said. “We did the daytime tour with them, so this is actually the first time seeing it at night. This is a neat place.”

“(Mike Walker) is a master storyteller,” Samantha said. “I especially liked the story about the Grey Man because it was so mysterious.”

James added, “The stories were awesome, and they were even better the way (Mike Walker) told them.”

Here are some of the highlights of the four spooky tales:

In addition to the beaches, people are drawn to the Hammock Coast for its nature-centric pastimes such as fishing, boating, kayaking and more. Historic sites, such as Hopsewee Planation, the Kaminski House, Brookgreen Gardens and Atalaya Castle at Huntington Beach State Park, are also popular must-do activities for visitors of all ages.

For more information about Huntington Beach State Park and Atalaya, click here. To attend a ghost tour at Atalaya, call the park at 843-235-8755.

To register for the Atalaya Sleepover, e-mail Interpretive Park Ranger Mike Walker at: mwalker@scprt.com or call 843-235-8755. A limited supply of tents and sleeping pads are available to borrow.

Murrells Inlet has a rich and colorful past. Learn about the local history, area ghosts, and legends of the Seafood Capital of South Carolina on Miss Chris’ Inlet Walking Tour along the Marsh Walk. The one-hour tour begins at 6 p.m. at Lazy Gator on U.S. Highway 17 Business in Murrells Inlet from early March-November, weather permitting.

Call or text to 843-655-4470 to reserve your spot. The tour is $15 per person (cash only). Children aged 8 and under are free. For more information, visit the Miss Chris’ Inlet Walking Tour Facebook page at https://www.facebook.com/marshwalkpiratelady.

Elizabeth Huntsinger and sometimes her husband, Lee, lead Ghosts of Georgetown Lantern Tours each Friday – and other days, by appointment. Donning traditional pirate costumes or Civil War uniforms, tour guides bring a touch of whimsy and history to their phantasmic tours.

Huntsinger, the author of three books about the ghosts and legends of Georgetown, spark tour-goers’ imaginations on visits to locations throughout the city. One of her favorites is the Winyah Indigo Society Hall on Screven Street. Society members enjoyed the hall only briefly before it was used as a hospital during the Civil War, and, eerily, it’s been haunted ever since.

This year-round lantern-led walking tour is one to one and-a-half hours, and one to one-and-a-half miles long. Tickets are $20 per adult, ages 13 and up, and $10 for children aged 8-12, cash only. Ghost tours depart Friday evenings at dusk with no less than five adults. Times will vary seasonally.

For more information or reservations, call (843) 543-5777, or visit the website at ghostsofgeorgetown.com. Reservations are required.

Family Fun: Ghosts of the Coast

Are you ready for a spooktacular tale and some Halloween fun? Come to Hobcaw Barony on Saturday, Oct. 29, 2022, from 10:30 a.m. to noon to hear of the local superstitions and scary stories, as well as the supernatural occurrences at Hobcaw Barony.

This storytelling program includes visits to Friendfield Village and Bellefield Plantation and will prepare kids of all ages for their own Hammock Coast experiences. This tour is recommended for ages 6 and up; children under 7 must be accompanied by an adult. Participants should wear close-toed shoes and dress for the weather and the possibility of biting insects. Reservations, which are $15 per adult, $10 per child, age 13 and below, are required. 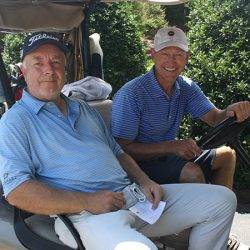 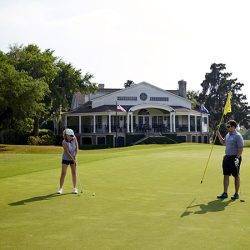