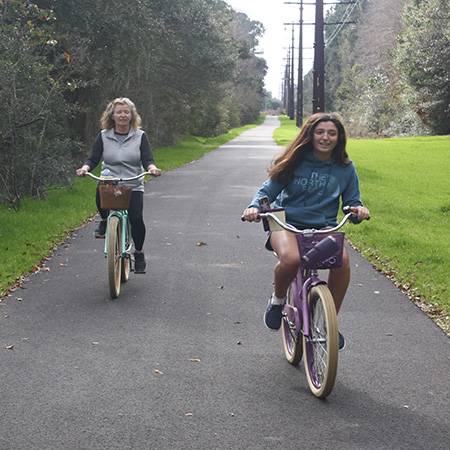 Georgetown County recently completed a crucial section of the Waccamaw Neck Bikeway in the North Litchfield community, from Boyle Drive to Trace Drive, that connects two existing sections in that area. County officials and community members held a ribbon-cutting ceremony for the new section on Jan. 15. The Hammock Coast is just a few miles south of Myrtle Beach. 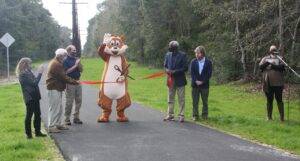 Georgetown County officials, and their new mascot, Forest the Squirrel, met with the North Litchfield community for a ribbon-cutting ceremony to celebrate the newest section of the Bike the Neck path on Jan. 15. From left are Linda Ketron, chair of Bike the Neck, County Councilmembers Bob Anderson, John Thomas Lewis Morant and Steve Goggans, and Parks and Recreation Director Beth Goodale. (Photo by Clayton Stairs/Chamber of Commerce)

“This stretch dramatically increases safety for all because it eliminates the only shared road portion of the path where cars and pedestrians have been in conflict on a narrow, curvy roadway,” said James Coley, engineering and capital projects planner for the Georgetown County Department of Public Services. “We in Georgetown County are pleased to have been able to complete this portion, and, frankly, we’re looking forward to more sections of bike path being designed and completed all over the county in the near future.”

Georgetown County designed, permitted, and constructed the new portion of the pathway. Plans for this section of the path started in 1994 but were held up due to a lack of funding and some private property easements. But it now gives visitors to even more things to do along South Carolina’s Hammock Coast.

The county applied for and was awarded a state Parks, Recreation, and Tourism Trails grant for $100,000 for a portion of the construction while funding the remaining portion from county funds. The county also sought input from the Litchfield Beaches Property Owners Association and the Bike the Neck organization, which has been working to create a continuous bike path through the Waccamaw Neck for 27 years. 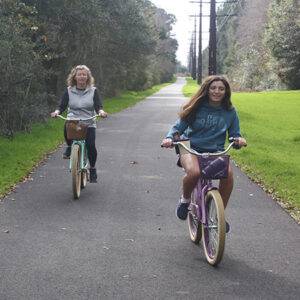 Donna Welch of Garden City and her niece, Hannah Pittman, who was visiting from Johnson City, Tennessee, said they loved riding on the bike path from Huntington Beach State Park to Litchfield, using the new section of path. (Photo by Clayton Stairs/Chamber of Commerce)

Most of the trail through Litchfield to Highway 17 Business in Murrells Inlet is well off the road, taking cyclists through a lush, wooded path that feels miles away from the heavy traffic on the highway. The path’s planned 0.6-mile route from Boyle to Trace runs under Santee Cooper electric lines. includes a parking area along Trace Drive where about a dozen cars can park.

Coley praised Linda Ketron, chair of Bike the Neck, for her years of work to make the expanded trail a reality.

“She provided valuable input, reviewing the plans to make sure both experienced and novice riders would appreciate the design,” Coley said. “Her organization, Bike the Neck, made significant contributions with public meetings that were very beneficial to the overall project. I and the Georgetown team look forward to working with Linda again in the future—her commitment and enthusiasm helped propel the process.”

Ketron said this is one of the most gratifying sections of the bikeway to be completed.

“When we began planning and fundraising (in 1994), the master plan was phased to provide a section for the north end, then a section for the south end, then the Willbrook Boulevard section was developed by the Litchfield Company, then we went up and completed bike lanes in Murrells Inlet, then the bike bridge and across Huntington Beach State Park, and finally along Kings River Road and Waverly to the Elementary School,” Ketron said. “We never imagined it would all take so long, but the link across North Litchfield was completed in the order we designed it. It was just a long time coming!”

Ketron agrees with Coley that safety is the primary benefit of the new section of path.

“For too many years, people were forced to use the internal streets of North Litchfield to get from the Murrells Inlet/Huntington stretch to the Willbrook/Kings River stretch,” Ketron said. “Since many of those people were vacationers, sometimes on a bike for the first time in decades, they didn’t know the rules. And without shoulders, if they were riding the wrong direction, they had no place to pull off if a car or golf cart suddenly appeared.”

Beyond safety, she said that all the goals of the Waccamaw Neck Bikeway will be met by this link – providing safe recreation and physical exercise, encouraging family activity, improving air quality, and generally making for a friendlier community. She credits the county for being the “best possible partner throughout this process.” 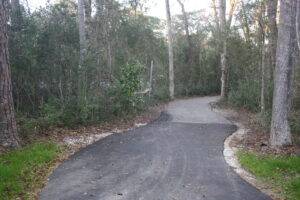 Most of the trail through Litchfield to Highway 17 Business in Murrells Inlet is well off the road, taking cyclists through a lush, wooded path that feels miles away from the heavy traffic on the highway. (Photo by Clayton Stairs/Georgetown County Chamber of Commerce)

“From multiple County administrators and Council members to Beth Goodale (Parks, Recreation and Leisure Services), Ray Funnye (Public Services), Boyd Johnson and Holly Richardson (Planning) and a special shoutout to Art Baker’s team in Engineering and Capital Projects (James Coley and Matt Miele), Bike the Neck has been informed and consulted along the way,” Ketron said.

“It’s important to remember that the Waccamaw Neck Bikeway is a county recreation facility, without their votes, their priorities, their financial investment, their commitment to maintain the bikeway, we would still be dreaming,” Ketron continued. “Our little volunteer committee has been their cheerleaders, promoters, fundraisers, and community activists, but the county deserves the credit for getting it done.”

Coley said county officials are pleased with the outcome of the project.

“It is a wonderful addition to the pedestrian infrastructure the county continues to build,” Coley said. “It’s something we can enjoy in a socially distanced way right now, and that means a lot. Of course, we hope the entire community will continue to use the path for many years to come.”

Paul Battiglino, who formerly worked on capital projects for the county, helped plan this section of path in the initial stages in 2012. He recalled that this section was a tough one.

“We were so concerned about the safety of bikers and hikers on these adjoining roadways, so we wanted to create a safer situation,” he said. “I’m so pleased it’s finally been resolved.”

He also said the wider width of the path is also for safety.

“It is a straight-forward run and you have to have a wider path to pass each other,” he said.

People who attended the ribbon-cutting ceremony on Jan. 15 said they are impressed with the design of the multipurpose track. Peg Howell, who lives near the new section of path, said it was planned out well.

“It is really great to have this bike path, which is not only safe, but convenient,” Howell said. “It facilitates parking for people who want to get on the path here and go.” 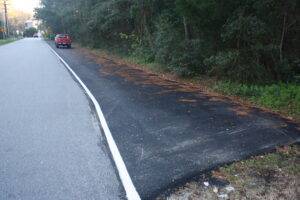 The new section of path features a marked parking area that can accommodate about a dozen cars. (Photo by Clayton Stairs/Georgetown County Chamber of Commerce)

She was referring to the outlined parking area along Trace Drive. She added that the county did a good job constructing the path through wetlands.

“They allowed the water to flow under the path, so we don’t have any problems with overflow in our neighborhood,” Howell said.

Howell knows personally how much work it took to make the extended bike path a reality, because her husband, John Thomas is an elected member of the Georgetown County Council, representing the area where the path section is located. Thomas was effusive in his praise of the project.

“It’s been a long time coming,” he said, “but this is a great new facility we have in Georgetown County. Here we are celebrating the opening of this magnificent addition to the Bike the Neck system. Let’s go ride a bike!”

Thomas credited the Litchfield Beaches Property Owners Association for helping to secure the easements and rights-of-way from homeowners and business owners along the path section. He specifically named Neil Williams, who acted as a liaison between the county and the POA.

Williams, who attended the ceremony, said a few words representing the POA organization.

“This has been a cooperative effort between private organizations and individuals, and the government,” Williams said. “The state government contributed a large sum of money, the county has contributed money, and the Litchfield Beaches POA contributed a sizeable amount.”

He pointed out that Santee Cooper Electric company agreed to allow the path section to go along power lines and the Christian Science Church donated its part of the right-of-way for the project.

“I really like it when the private sector and the government can work together to bring about a worthwhile project like this,” Williams said.

Donna Welch of Garden City and her niece, Hannah Pittman, who was visiting from Johnson City, Tennessee, said they were riding on the path from Huntington Beach State Park when they came across the ribbon-cutting ceremony.

Most importantly, they both said they enjoyed riding along the path.

“We love it,” Welch said. “We love riding, and this is the first trail that we’ve found that is as nice as other trails we have seen. We will be back!” 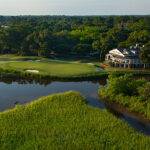 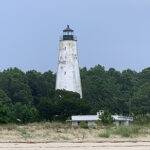