When a community effort helped save the historic Harper House building 19 years ago – and move it several city blocks – only the biggest of dreamers might have imagined that the house would now welcome almost 15,000 visitors a year to Georgetown and South Carolina’s Hammock Coast.

In fact, tourists regularly greeted at the Georgetown County Chamber of Commerce’s Visitors Center, located at 531 Front St., probably have no idea that the entire house was relocated to its current location from Screven Street on Dec. 15, 2002. After the move, it officially opened for business on Sept. 14, 2006, and has welcomed tens of thousands of visitors since then.

Today, the first floor of the building serves as the Visitors Center, while additional Chamber offices and a boardroom are located on the second floor. In 2019, the Chamber opened a second Visitors Center at 28 Wall Street in the Litchfield community of Pawleys Island.

The Harper House, built circa 1850, was originally located on Screven Street, across from the county courthouse. It was a family residence before it housed the office of Samuel Harper, a local surveyor. 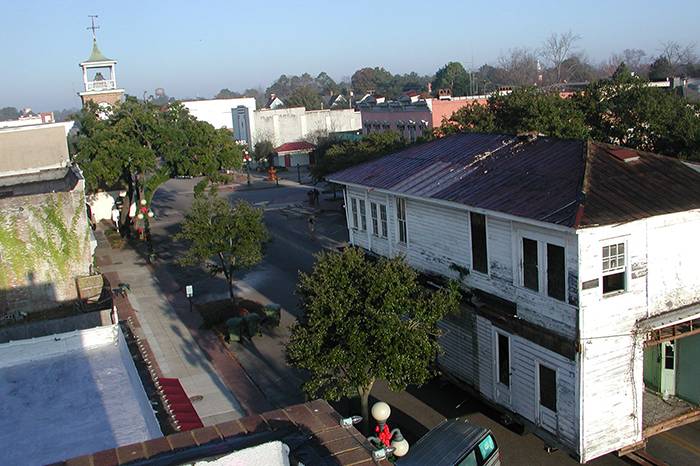 Harper House was moved in 2002 from Screven Street to its current location on Front Street, where it serves as the Georgetown County Chamber of Commerce Visitors Center.

Encounters with thousands of tourists each year may not have occurred if not for a collaboration between Chamber officials, The Georgetown Times and city and county leaders in 2002. During that year, Georgetown County leaders had purchased the Harper House and were seeking to have it demolished to make room for more parking for offices along Screven Street.

The county made two such requests to the city’s Architectural Review Board, citing termite infestation as the reason for demolition, according to county planning officials. The county was turned down both times because the building was considered historic.

Hearing about the county’s dilemma with the Harper House and needing a permanent home of its own, the Chamber of Commerce stepped up to save the historic building. Working with the city, the county and Evening Post Publishing Co., owner of The Georgetown Times and the land where the building is now located, the Chamber signed a 50-year lease at a cost of $1 each year. That lease will expire in 2052. Prior to moving into the Harper House, the Chamber was housed in the old Post Office building on the south end of Front Street.

Following the 2002 move, the Harper House was in need of repairs, including new windows, paint and rebuilding the original porches and balconies. To meet those needs, the Chamber collected more than $150,000 in contributions to complete the $300,000 project, according to Chamber officials at the time. A portion of the donations were from businesses and supporters purchasing personalized bricks for $100 each that are a permanent part of the walkway leading to the front door.

The Historic Seaport Maritime Museum (now the South Carolina Maritime Museum) also paid rent to occupy the back half of the downstairs for five years until it opened its much-larger location on Front Street in 2011.

Clayton Bull, who was serving as chair of the Maritime Museum board of directors in 2006, said the museum had three ship models in glass cases on display. According to an article in The Georgetown Times in 2006, the three ship models were of a side-wheeler steamer named the Gov. Safford, which from the early 1890s to 1926 carried freight and served as a ferry from the Pawleys Railroad in the Pawleys and Hagley areas to the shops and offices on Front Street in Georgetown; a four-masted schooner called the City of Georgetown; and a modern-day commercial shrimp boat named Prodigal Son, which is symbolic of the many just like it that have caught shrimp out of the Georgetown Harbor for many decades.

“The model cases filled it up,” Bull said. “It was a small space, just half of the building (downstairs).”

Johnny Weaver, who served on the board in 2006 and is now the president of the Harbor Historical Foundation, the nonprofit association that runs the South Carolina Maritime Museum, agreed. “I am so proud of where we are today, after sharing a spot with the Georgetown County Chamber of Commerce to now owning our own two-story museum building on Front Street,” Weaver said. “We have come a long way.”

Renovating the house into the Chamber’s new offices and the Visitors Center required help from many sources. Mount Pleasant Plantation LLC, based in Charlotte, North Carolina, made a five-year pledge to support renovations with a contribution of $2,500 per year, and the Rotarians of Georgetown donated landscaping, including sod, plantings, a sidewalk and a gazebo now located in front of the building. By August 2006, renovations to the building and landscaping outside made it one of the most attractive buildings in the area and it was ready for an open house by September. 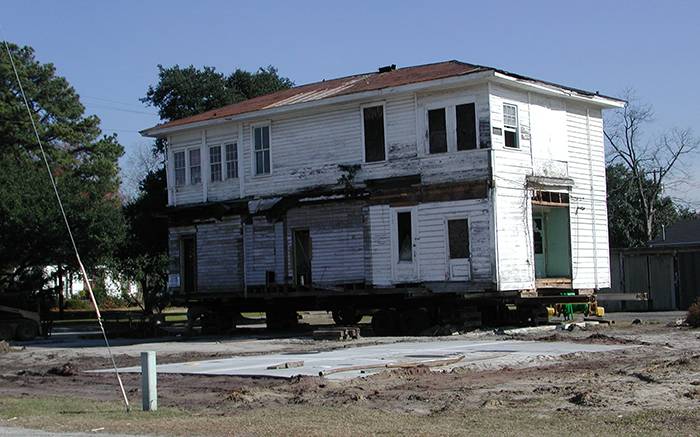 The historic house was relocated to 531 Front Street on property owned by The Georgetown Times. As can be seen here, quite a bit of work was needed to restore the historic home.

George Chastain, executive director of Hobcaw Barony, served as chair of the Chamber’s board of directors in 2002 and 2003 and worked with the committee in charge of renovations for a year after that. He described the work on the Harper House as “adaptive reuse.”

“We made changes to make it usable,” Chastain said. “It was exciting to see the house preserved, and we were also excited to get a fairly permanent home for the Chamber.” He said he was glad that the Chamber was able to save the building.

“Historic structures like the Harper House represent the character of our community,” Chastain said. “The Chamber stepped up to preserve that character for the community. … It has provided a nice Visitors Center in the historic section of town, anchoring that side of Front Street, the business section of Front Street.”

John Burbage, who was publisher of The Georgetown Times and a member of the Chamber board in 2002, was the one who first proposed that the building be moved to the newspaper’s marina property just north of the Times’ own building.

“There was a vacated cinder-block gas station on the site that was beyond repair,” he recalled. “A group of Georgetown business, government and civic leaders — myself included — had been invited to Newport, Rhode Island, by the National Trust for Historic Preservation to see how that city had saved numerous historic properties through various cooperative efforts. So several of us — including the county administrator, a city councilman, Chamber officers and bankers — figured out a way to move the Harper Building over to the newspaper lot on Front Street, rehab the building in keeping with its long history and put it to good use as a badly needed headquarters for the cash-strapped Chamber of Commerce.”

The money that the county set aside to tear down the building and dispose of the rubble was used to pay to have it moved, Burbage said.

“Evening Post Publishing Co. and The Georgetown Times donated the land, as well as a significant amount of money, for the rehab work,” he added. “The city worked with the newspaper to get the parking lot paved and the banks handled some low-interest loans.” Burbage added that the whole arrangement was a win-win situation for everyone involved.

“We proved that good things happen when community leaders work together for the general good,” he said. “We saved a historic building, transformed a rundown area on Front Street into an attractive Visitors Center, saved the Chamber a lot of money, as it had been paying a small fortune to rent the old Post Office building, provided valuable downtown land for paved public parking and helped make Georgetown an even better place.”

Marilyn Hemingway, president and CEO of the Gullah-Geechee Chamber of Commerce, was serving as the Georgetown County Chamber’s membership director during the later renovations to the building and also during its grand opening. She said she recalls that the Harper House was in rough shape when it was first moved, with holes in the floor. She also remembered the joy of moving from the Chamber’s previous home in the old Post Office building to the newly renovated Harper House.

“The contractor that did the work did a wonderful job taking a historic building and converting it, bringing it up-to-date and making it more functional,” Hemingway said.

The success of the Visitors Center today, she said, is due in part to the community coming together and supporting efforts to refurbish the building.

“We recognized the opportunity of having a permanent Visitors Center here in Georgetown,” Hemingway said. “It allows us to put our best foot forward for all of the visitors near and far, and give them a convenient place to stop and learn more about Georgetown and its attractions.” 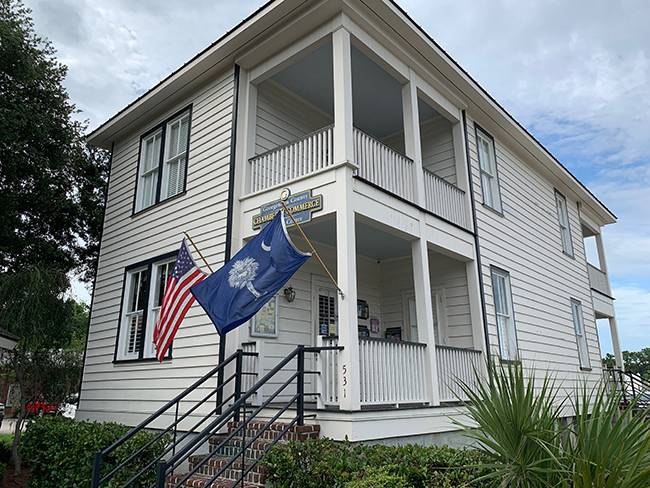 Paige Sawyer, a local photography business owner, was a Georgetown city councilman during the Harper House move and renovations. He said having a Visitors Center on Front Street is vital for the city.

“The location of the Visitors Center on Front Street is ideal,” Sawyer said. “We’ve got natural beauty and the historic district and that is what draws people to the city.”

Much has happened in Georgetown since the opening of the Visitors Center in 2006, said Beth Stedman, the Georgetown County Chamber’s CEO and president. One big change is the number of visitors who come to Georgetown County and South Carolina’s Hammock Coast.

“Those numbers,” she said, “go up every single year, and the Chamber staff and I are delighted to often be the first to greet visitors and welcome them to our city and our county. And to do so in a historic home that was saved from demolition makes that even more special.” 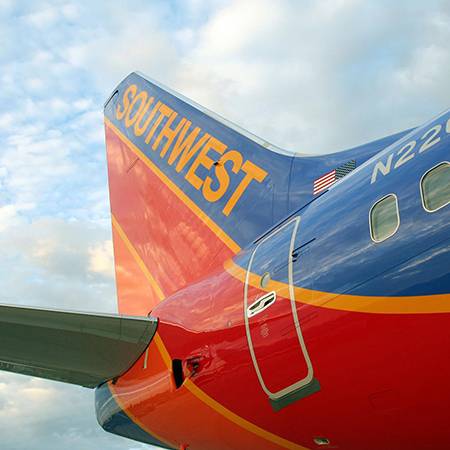 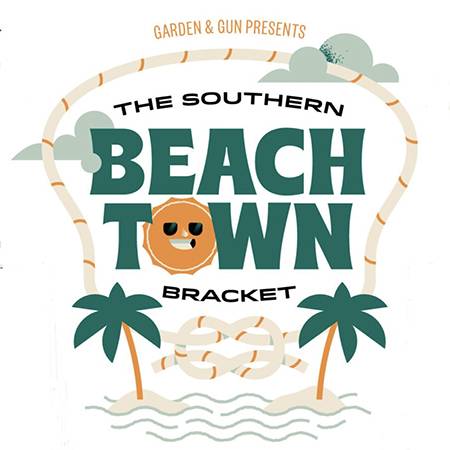