Celebrating springtime and new beginnings, participants of a recent Friends of the Waccamaw Library fundraiser had the opportunity to visit eight private gardens on South Carolina’s Hammock Coast.

The event raised over $9,000 that will benefit the Friends of the Waccamaw Library, for purchasing books for the library, as well offering programs and updating technology, according to FOWL Garden Tour Chair Dee Phillips.

She said the event, which was held on May 22, would have been impossible without the 70-plus volunteers who stepped up to help. This is the first fundraiser held by the group since February 2020 because of the Covid-19 pandemic, and it was designed to be an outside event that allowed for plenty of social distancing. 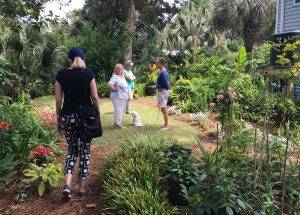 A group of tour-goers are welcomed by volunteers at the beach cottage of Sharon and Joey Turner in Litchfield Beach. (Photo courtesy of the Friends of the Waccamaw Library)

“Planning for this event started last fall, not knowing where we would be with regard to the Covid crisis this May,” Phillips said. “We were hopeful that an outside event could be held, and as the population began to be vaccinated early this year, we moved forward.”

The gardens ranged from cottage-style to eclectic to formal. In Murrells Inlet, patrons enjoyed the cottage garden of Anita Lampley and her husband, Randy.

“When they first saw the property in 1983, the old home was still viable,” Phillips said. “It wasn’t until 25 years later that they were able to acquire the property and were then unable to salvage the old home.”

Instead, they built a Victorian-style home that looks like it has always been there, she said.

“As a couple, they aim to have something blooming all year, saving seeds from plants for the next year, and to have early, midseason, and late bloomers in as many flowering plants as possible,” Phillips said. “Anita makes a large arrangement for her church weekly from flowers in her garden.”

In the Litchfield community, tour-goers visited the beach cottage of Sharon and Joey Turner.

The cottage is anchored by two large live oak trees that were planted from 15-gallon pots as a Mother’s Day gift to Sharon’s mother in 1993.

“As owner of Creative Landscapes in Murrells Inlet, Sharon’s garden reflects her passion for green space and design,” Phillips said. “She describes herself as an experimental gardener who enjoys playing with textures.”

Two homes on the tour were in the Willbrook community of Litchfield. One is located next to an old rice field where the water rises and falls with the tides, she said.

“The patio view of the cypress trees and their knobby knees is both beautiful and restful,” Phillips said. “A large fountain adds to the peace.”

The second home in the Willbrook community is an eclectic mix of the two cultures of its owners, the Glendinnings, she said. 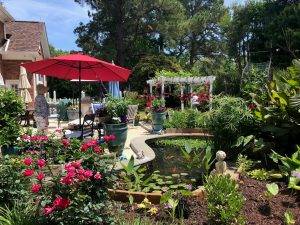 The Glendinning’s Eclectic garden in Willbrook was a favorite among attendees. (Photo courtesy of the Friends of the Waccamaw Library)

“The lady of the home is from Texas, while her husband hails from Albania, where he was a European-trained mason, amateur pot maker, and innovative iron worker,” Phillips said.

In the Pawleys Island area, one of the property’s featured Tanya Ackerman’s Friendship Garden, which is less than one year old. The award-winning photographer gained her love of gardening from the women in her life, Phillips said.

“She and friends moved over 300 plants last June from her previous home,” Phillips said. “There are several micro-gardens there including the Monet garden, with many irises and dahlias, a full sun-butterfly garden, and a fern-shade garden.”

“Once a part of Waverly Plantation, then owned by former enslaved laborers of the Wineglass family, this yard features simple pleasures, outbuildings and outdoor rooms, all built by Lee’s late husband, Bill Shehan,” Phillips said. “In 1980, Bill bought the first of four acres, hosted a ‘barn raising’  and built the two-story home.  The former stable was turned into a party barn/guest house, the chicken house into a potting shed, and a carport into the barbecue shed.” 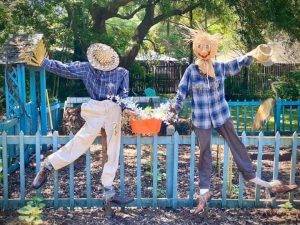 Scarecrows welcomed tour-goers for lunch during the event at the home of Lee Brockington in Pawleys Island. (Scarecrows and photo by RIchard Nesbit)

Brockington, who previously served on the FOWL board of directors and as its president, said she was honored to be part of this special event which focused on what could be done, not what could not be done.

“I think of the library as an important part of our community,” Brockington said, “so I was glad to be a part of this event, which was held despite Covid-19, to help them raise funds to maintain and improve the library.”

She said her yard is for sharing with the community and having her yard as the picnic lunch spot was perfect.

“I love to share my yard because to me, it is all about providing a sense of community,” Brockington said. “I was so glad that we could use the space under the large oaks because it is simple, rustic and relaxed.”

She commended her two sons, Clay and Brock, as well as Clay’s wife, Victoria, for helping her get the yard ready. She also thanked Pawleys Island Bakery and Kona Ice for supplying food for lunches.

Two homes on the tour were in DeBordieu Colony, a community near Georgetown. The first featured a rookery, surrounded by water, in the back yard where egrets, herons, and an osprey nest in spring, she said.

“The homeowner leaves small branches and sticks on her bank for the birds to use in building nests,” Phillips said. “The second home features many large live oak trees and overlooking the waterway behind the home there is a sun garden with many Asiatic lilies, daylilies, and yucca accented by a teak bench and orbs.  The shade garden features Acanthus or Bear’s Breeches.”

Also featured on the tour was the Low Country Herb Society’s garden at the Waccamaw Neck Library.

“The goal of The Low Country Herb Society, established in 1986, is to increase knowledge of herbs, stimulate interest in planting, harvesting and using herbs, and to cultivate herb programs in the community,” Phillips said. “In 2015, the society moved its herb garden to the current location at the Waccamaw Neck Library.” 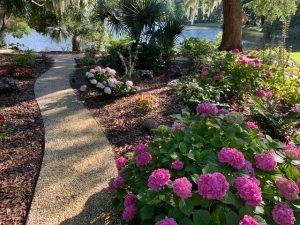 The Cross garden in DeBordieu Colony featured colorful blooming flowers. (Photo courtesy of the Friends of the Waccamaw Library)

Phillips said fundraising events like this one really make a difference for FOWL, especially when unexpected things like the pandemic happen. She added that the very creative Waccamaw Library staff was awarded the Georgetown County innovation award for their summer reading program and the children’s mobile project.

“Last summer, during the height of the pandemic and with half the previous year’s income, we were able to support a summer reading program with the largest participation to date: 170 children and 45 adults,” she said. “FOWL donations also funded the purchase of new books and staff training opportunities such as Leadership Georgetown and YALL Fest, which is the Charleston Young Adult book festival.” 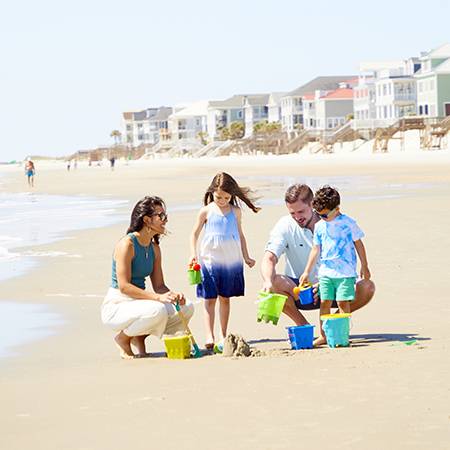